Cuba thanks the world for its support against U.S. blockade 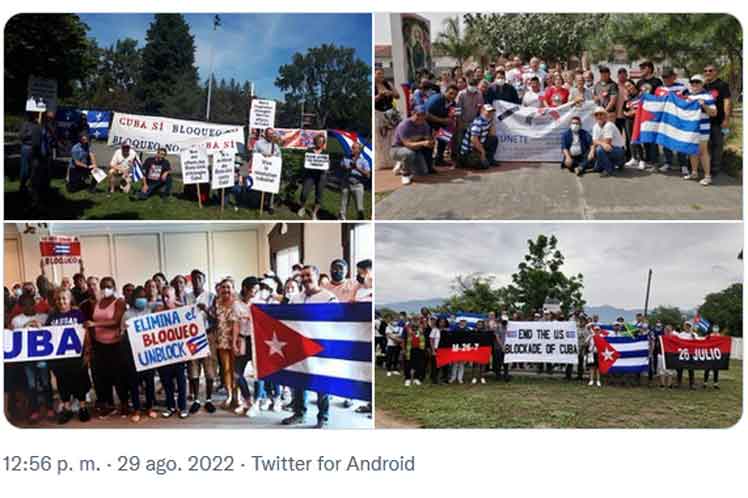 Cuba thanks the world for its support against U.S. blockade

Havana, Aug 29 (Prensa Latina) Cuban President Miguel Díaz-Canel today expressed his gratitude for the support of the country and the world for the demand to lift the blockade imposed by the United States on Cuba for more than six decades.

In his Twitter account, the Cuban head of state referred to the mobilizations that took place this Sunday in Miami and other cities around the world against the economic, commercial and financial siege of Washington’s coercive measures against Cuba.

I embrace all those who continue to bet on building #PuentesDeAmor. In this struggle, in which we are right, we will also win, Díaz-Canel said in his message in reference to the Bridges of Love movement, main promoter of the initiative.

On this occasion, the day of demonstrations, which is held on the last Sunday of each month, coincided with the 59th anniversary of the ‘I Have a Dream’ speech of the assassinated civil rights leader Martin Luther King.

According to Carlos Lazo, coordinator of this movement, the dream today of people in solidarity around the world “is to build bridges of love between Washington and Havana, between Hialeah and Marianao, between Seattle and Santiago de Cuba”.

Last May 16, the Democratic administration announced some measures on visas, regular migration, travel, remittances and adjustment to regulations for transactions with the non-state sector that were well received; however, they did not touch the very essence of the blockade.

Cuban authorities expressed in this regard that this is a limited step in the right direction, but that the announcements do not modify at all the blockade or the main coercive measures adopted by the Trump administration.