More than 240 foreign runners confirm for marathon in Cuba 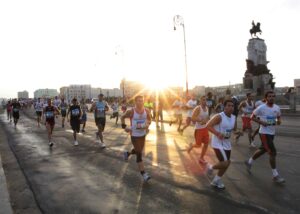 More than 240 foreign runners confirm for marathon in Cuba

In statements made to the weekly Jit in its digital edition, Gattorno ratified November 20 as the date for the Marabana and advanced the dispute of the open national championship in the same test after four years of absence.

If a non-national competitor wins the event, he automatically becomes the title winner of this country, the director clarified among the novelties for this year and recalled that it will be run by age category.

That is why we hope to grow in walkers, despite the fact that marathons in the world are depressed due to the international economic situation and the diseases that plague the planet, he commented.

The executive also addressed the importance of Marabana’s strategic alliances with the international business organization AS Deporte de México, in charge of logistics and other insurances, an entity that enjoys preferences among Mexican and Latin American long-term runners.

That institution will become the official sponsor of Marabana 2022, Gattorno said after holding a meeting with Jaime Cardaval, well-known leader of the Technical Committee of the International Triathlon Union and former president of the Mexican Federation of that sport (2000-2004 and 2006- 2016).

Since 2019, Cuba has not organized the Marabana in person due to the Covid-19 pandemic, and on that occasion Alien Reyes, from the eastern province of Granma, and Yudileyvis Castillo (Santiago de Cuba) triumphed.

By 2022, the organizers expect an important rebirth, in a race marked three years ago by the participation of 5,858 walkers, 1,449 of them foreigners and the leading role of some 400 Americans.