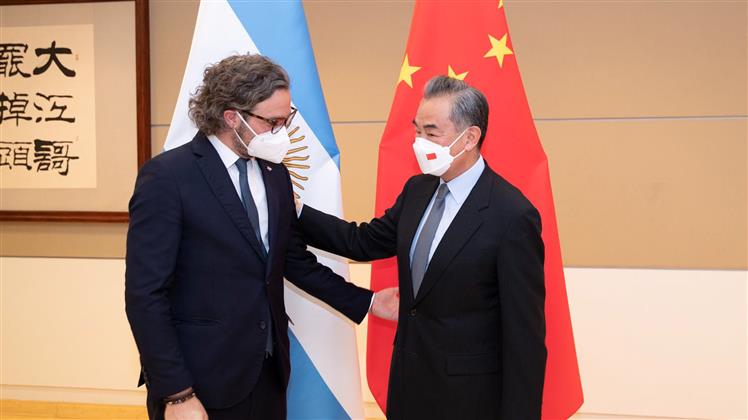 During a meeting within the framework of the 77th session of the United Nations General Assembly, the foreign ministers analyzed Argentina’s entry into the Brics group (Brazil, Russia, India, China and South Africa) and actions to deepen the Comprehensive Strategic Partnership between their countries.

They also agreed to promote high-level joint work and highlighted the excellent state of the bilateral relationship, especially during the Year of Friendship and Cooperation, inaugurated by Presidents Alberto Fernández and Xi Jinping to commemorate the 50th anniversary of the establishment of diplomatic ties.

According to a statement from the Argentine Foreign Ministry, Wang expressed China’s support for the incorporation of Argentina to the Brics, which was thanked by Cafiero, who also assured that Argentina can contribute to strengthen and broaden the voice in defense of the interests of the developing world and the global south.

The Argentine minister also urged to coordinate policies on energy and food security and to strengthen ties between China and CELAC, for which he considered it necessary to continue working on the plan agreed for the period 2022-2024.

He also stressed the importance of promoting a more balanced and diversified bilateral trade, and the need to speed up market opening processes.

In addition, he proposed to increase cooperation and investments in sectors such as energy, since Argentina has the second largest reserves of unconventional gas in the world and is the fourth largest producer of lithium.

China is currently the second largest trading partner and destination for Argentine exports and both nations are making progress in the implementation of infrastructure works within the framework of the Memorandum of Understanding of the Belt and Road Initiative.

On the other hand, Cafiero highlighted the Chinese support in the Special Committee on Decolonization for Argentina’s sovereign rights over the Malvinas Islands.