Cuba has the right to live without a blockade, says Indian newspaper 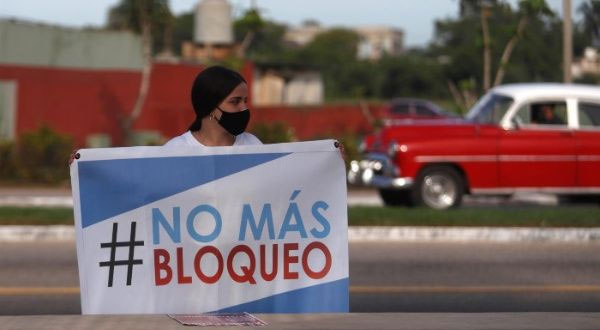 Cuba has the right to live without a blockade, says Indian newspaper

New Delhi, Sep 21 (Prensa Latina) Cuba has the right to live without a blockade, that was the headline of an interview with Cuban diplomat Malena Rojas, secretary for Press and Cultural Affairs at the Havana embassy in New Delhi, published today by the Financial Express newspaper.
Share on facebook
Share on twitter
Share on whatsapp
Share on telegram
Share on email

In the first week of November, the UN General Assembly will once again consider the draft resolution calling for the end of the US economic, commercial and financial blockade against Cuba, the newspaper recalled.

‘India always maintained its support for the struggle of the Cuban people to end this unjust and criminal siege and there are many expressions of solidarity on the part of the government and the people towards Cuba,’ said the representative of the Caribbean country.

In 2020, when Cuba, like the rest of the world, was facing the challenges of the Covid-19 pandemic, the U.S. government reinforced the blockade in a deliberate and opportunistic manner, causing losses of five billion dollars to the island nation. Donald Trump’s administration imposed 243 unilateral coercive measures to restrict the arrival of travelers and harm third party tourist markets and deprive Cuba of fuel supplies.

In addition, it intensified the defamation campaign against Cuban medical cooperation, increased harassment of the island’s commercial and financial transactions in other countries and sought to intimidate foreign investors and companies with the application of Title III of the Helms-Burton Act, the diplomat explained.

Washington prevented the regular and institutional flow of remittances to Cuban families, dealing harsh blows to self-employed workers and the country’s private sector, among other actions of a failed policy aimed at subverting the constitutional order in Cuba and causing unjustifiable shortages, pain and suffering to Cuban families.

In the first 14 months of President Joseph Biden’s administration alone, damages caused by this policy amounted to $6.364 billion dollars, depriving Cuba of income necessary for the well-being of its people.

Likewise, the unilateral and fraudulent decision of the White House to designate Cuba as a state sponsor of terrorism reinforces the impact of the U.S. blockade against the island.

Meanwhile, Cuba has been the victim of terrorist actions organized and financed by the U.S. government, which cost the lives of 3,478 Cubans and disabling injuries to another 2,99.

As part of disinformation and destabilization operations, every year Washington allocates millions of dollars from the federal budget and additional sums of covert funds to subversion programs in an attempt to produce political and social instability in the midst of economic difficulties caused by the U.S. government itself.

The blockade policy, which causes significant damage to the human rights of all Cubans, arouses the profound rejection of the peoples of the world, Rojas added.

Cuba recognizes the labor of workers in the recovery of Havana

Cuba recognizes the labor of workers in the recovery of Havana