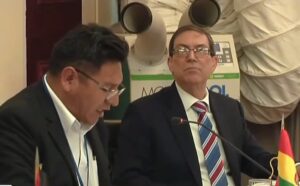 This ‘unjustified inclusion’ by the U.S. Government discredits the legitimate cooperation efforts of the UN and the international community in their fight against terrorism, said the integration body in the final Declaration of its XXII Political Council, held in New York.

The ALBA-TCP member states demanded Washington to reverse this ‘unilateral action’, widely rejected in the region and the world.

They stressed that this measure has a negative impact on the Cuban people by increasing the island’s difficulties in its insertion in international trade, carrying out financial operations and acquiring basic inputs.

The Foreign Ministers of the Alliance also reaffirmed their rejection of the imposition of unilateral coercive measures against sovereign States, in violation of the norms and principles of International Law and the United Nations Charter.

In this regard, they advocated the unconditional and immediate lifting of the ‘criminal and illegal economic, commercial and financial blockade’ imposed for more than 60 years by the United States on Cuba, in accordance with the resolutions of the General Assembly.

They also rejected the imposition of unilateral coercive measures against the peoples and governments of Nicaragua and Venezuela, which violate international law and prevent the full enjoyment of human rights.

In the text, unanimously approved, the ALBA-TCP foreign ministers agreed to intensify cooperation, including multilateral cooperation, to help the most vulnerable States, small island developing countries and landlocked developing nations, on issues such as the negative impact of climate change.