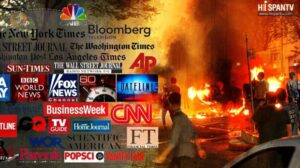 Tehran, Sep 26 (Prensa Latina) Hybrid War Against Iran, this is the title of today's analysis on the website of the Spanish-speaking Persian channel, Hispantv, under the signature of Pablo Jofré, an expert on international issues.

The Islamic Republic of Iran is facing a difficult situation (…) which in these days has meant mobilizations, looting, destruction and death, as part of the hybrid war strategy against the Persian nation’, the analyst says.

Jofré explains that the current conflict is carried out by certain powers against a geopolitical rival in order to weaken it from within.

Actions that could range from boycotting the economy of the enemy nation, getting into cybernetic networks or even establishing cultural centers just to finance political parties related to their interests, he alleges, citing a previous article published in Rebelión.

In the case of Iran and the events that occurred after the death of young Mahsa Amini brought other components of this hybrid war, such as manipulation and disinformation strategies, as well as the control of social networks.

Jofré did not rule out that the violent events derived from the death of young Mahsad Amini were used as part of this hybrid war strategy, and expressed his solidarity with the family of young Amini.

Referring to extremists, terrorists, the expert pointed to MKO, Kurdish separatist groups such as Komala, the intelligence services associated with the enemies, foreign forces and those who question Iran’s cultural and religious aspects, as is the case of the Hijab.

The analyst concluded by assuring that Iran is determined to explain the facts that meant the death of Mahsa Amini, but in no way to accede to the hypocrisy and action of its enemies, and as proof of this he alluded to the massive mobilizations in support of a country in peace.