Rainy season: the odyssey of Guatemalans 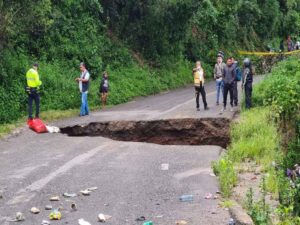 Rainy season: the odyssey of Guatemalans

Guatemala City, Sept 29 (Prensa Latina) September will close as the most complex month of the rainy season in Guatemala, where landslides, collapsed drains and sinkholes are today the odyssey of the roads.

To the traditional traffic queues, unexpected events are now added, such as the opening of large holes in the asphalt, the worst of all, for the moment, in the municipality of Villa Nueva, where two women are still being sought, whose vehicle fell on Saturday into one of the two cracks opened in the middle of the intense traffic on the roadway.

The huge hole literally swallowed another car with its occupants and a motorcycle, but they managed to get out and only have minor injuries.

However, until Wednesday it was possible to locate the vehicle in which the mother and daughter (15 years old) were traveling, and search efforts are complex due to the instability in the area and the persistent rains that cause new landslides.

Also on Wednesday, there were landslides in the so-called Columpio de Vista Hermosa, zone 15 of the capital, and the busy highway to El Salvador shows multiple cracks since last weekend, which keep drivers in suspense.

In view of the risk for the circulation of heavy and light transport, President Alejandro Giammattei announced that repair works of the road would begin this weekend, so that the passage of one of the lanes will be paralyzed, which will be a new nightmare, but necessary.

Guatemala is one of the most vulnerable countries to climate change, the governor recalled at a press conference before the tragedy in Villa Nueva; however, he also said that the municipalities do not systematically check water collectors, main cause of these events every year.

Kay becomes a hurricane off Mexico

Kay becomes a hurricane off Mexico