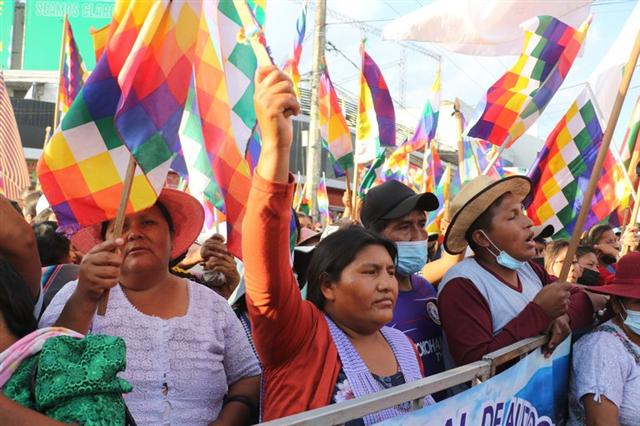 La Paz, Oct 3 (Prensa Latina) Trade unionists, workers and farmers' women of Santa Cruz are leading a march today against the threat of a strike for an indefinite period of time approved in the town hall led by power groups last Friday in that Bolivian department.

We are organized and we have declared ourselves in a state of emergency, as we have been doing, we will demonstrate in the streets and we do not rule out organizing another meeting,” said Jaime Flores, executive of Gremiales Unidos, at a press conference.

Flores warned that this type of protest promoted by the Santa Cruz elites affects the economy and the right to work of those who depend on their daily income.

The public forum, whose agreements are not binding, at the proposal of the Pro Santa Cruz Civic Committee decided to hold an indefinite strike if within 21 days the schedule for the 2024 Population and Housing Census is not changed to a year earlier.

Other demands evidenced the political nuance of the call, based on the census exercise.

However, they highlighted among them the Terrorism-Separatist case and the demand for a trial against former President Evo Morales, the subjugation of lands, coca cultivation, the label of ‘traitors’ in reference to the mayor of Santa Cruz, Jhonny Fernandez, and the authorization of the incorporation of transgenic crops in agriculture.

In declarations to the state channel Bolivia Tv, the executive of the Central Obrera Departamental de Santa Cruz (COD), Rolando Borda, said that the Santa Cruz workers are also in a state of emergency and will not join these pressure measures.

We reject the determinations of the right wing and the civic groups against the population.

We are not going to join these measures and for this we are going to hold evaluation meetings because we see that Camacho and the civic groups are again seeking to apply the recipe of destabilization to create a strike and threaten democracy’, Borda though careful.

Venezuelan gov´t in solidarity with the Bolivian people

Investigation against Luis Fernando Camacho is respected in Bolivia

Venezuelan gov´t in solidarity with the Bolivian people

Investigation against Luis Fernando Camacho is respected in Bolivia