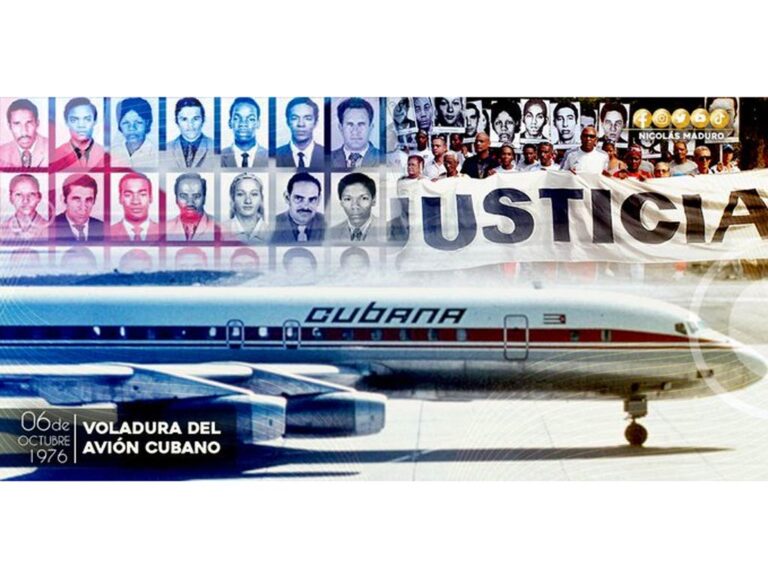 Caracas, Oct 6 (Prensa Latina) Venezuelan President Nicolas Maduro today recalled the 46th anniversary of the Barbados crime, in which 73 people of different nationalities were killed in a terrorist attack.

The criminal action killed 57 Cubans, mostly young athletes, five citizens of the People’s Republic of Korea and 11 Guyanese, in a plan hatched in Venezuela by terrorists Luis Posada Carriles and Orlando Bosch, and sponsored by the CIA.

‘We embrace our brothers in Cuba, who despite the incessant aggressions, keep their dignity intact. Honor and Glory!’, expressed the head of state in his Twitter account.

On this 1976, the Cubana de Aviacion CU-455 plane departed from the Caribbean island of Barbados and in mid-flight exploded due to bombs placed inside by Venezuelans Hernan Ricardo and Freddy Lugo, perpetrators of the abominable crime.

Subsequent investigations demonstrated the close links of Posada Carriles and Bosch with the U.S. Central Intelligence Agency, which from the very beginning of the Revolution in 1959 planned criminal actions against the Cuban people and its leaders.

After a long process of investigations, the justice system sent Ricardo and Lugo to jail, Bosch was released after a brief stay in prison, from where Carriles was able to escape in Venezuela due to the complicity of the State, the justice system and the penitentiary system.

In bidding farewell to the plane’s victims on October 15 in a crowded Plaza de la Revolucion, Fidel Castro said that ‘for thousands of years our people will remember, condemn and abhor in the depths of their spirit this horrible assassination’.

We cannot say that pain is shared. The pain is multiplied. Millions of Cubans weep today with the loved ones of the victims of the abominable crime. And when an energetic and virile people cry, injustice trembles,’ the Cuban leader said.

In homage to those who died on the Barbados flight, Cuba proclaimed October 6 as the Day of the Victims of State Terrorism, which also commemorates the more than 3,478 fallen Cubans and another 2,99 who were affected by Washington’s violent plans against the island.