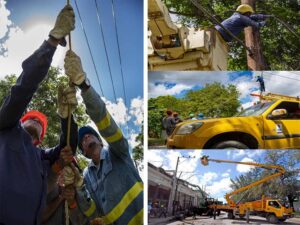 Havana, Oct 8 (Prensa Latina) Cuba closes a week on Saturday marked by a race against time to repair as much as possible the enormous damage caused by Hurricane Ian, in the midst of the difficulties increased by the long United States economic, and financial and commercial blockade.

In western Cuba, winds and rains damaged more than 94,000 homes, many of them completely destroyed, and left the provinces of Pinar del Rio, Artemisa, Mayabeque, and Havana without electricity, thus affecting the normal development of daily life.

The hurricane also caused considerable damage to crops, when food is one of the major problems facing the country.

Since the hurricane passed on November 27, the work has focused on trying to return to normal with a nationwide mobilization of available resources, often insufficient for the size of the challenge, and the help of men and women from all over the country.

President Miguel Diaz-Canel and other leaders of the Government and the Communist Party at all levels and ministers involved in the recovery have been constantly leading the progress of the works.

At the latest meetings for this purpose, the President has emphasized the need to carry out all actions as quickly and promptly as possible.

This is essential because although electricity has been restored in the capital and significant progress has been made in other provinces, in Pinar del Rio, where the biggest damage has been caused, only 30 percent of customers have power.

In view of the serious situation, there was no lack of international solidarity these days as large amounts of resources have been sent from Mexico, Venezuela and other countries, as well as the contribution of institutions such as the United Nations World Food Program and the help of friends of Cuba and Cubans residents in many nations.

Such contributions are doubly valuable for the Cubans, who are resisting the sixty-year old economic, commercial and financial blockade that the Joe Biden administration maintains without major changes even though governments and international organizations have asked to ease it at least in order to facilitate Cuba’s recovery.

Iran denounces US for politicizing humanitarian aid to Syria

Americans report negative impact of government on their lives

Iran denounces US for politicizing humanitarian aid to Syria

Americans report negative impact of government on their lives