Pakistani PM’s trip to China to focus on economic corridor 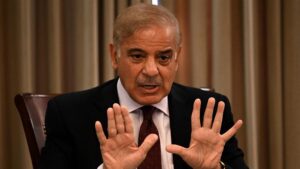 Pakistani PM’s trip to China to focus on economic corridor

Islamabad, Nov 1 (Prensa Latina) Pakistani Prime Minister Shehbaz Sharif said on Tuesday that he will discuss with China the strengthening of bilateral relations and the revitalization of the multi-billion dollar Economic Corridor (CPEC) between the two countries.

The Pakistani official, who left for Beijing on Tuesday for a two-day visit, accompanied by a high-level delegation, said the second phase of the CPEC promises to usher in a new era of socioeconomic progress that will improve the people’s quality of life, the Associated Press of Pakistan reported.

Sharif will make his first trip to China at the invitation of Li Keqiang, prime minister of the State Council of the People’s Republic of China since he took office in April.

‘There is much to learn from the Chinese economic miracle,’ the Pakistani leader wrote on Twiter.

He added that he was honored to be among the first leaders invited to visit Beijing after the historic 20th Congress of the Communist Party of China.

At a time when the world is facing multiple challenges, Pakistan and China stand together as friends and partners, Sharif noted.

‘Pakistan can serve as a manufacturing base for China and an extension of its industrial and supply network,’ the prime minister wrote in an opinion article published in China’s Global Times newspaper on Sunday.

He pointed out that the two countries could speed up bilateral cooperation to boost business-oriented agriculture, the efficient use of water, the development of hybrid seeds and high-yielding crops, and establish cold storage chains.

Prime Minister Sharif expressed gratitude to China for being one of the largest donors of flood relief in Pakistan and for establishing an airlift for the supply of tents, food and medicine, the Pak Tribune website reported.

China and Brazil agree to use yuan in cross-border transactions

China and Brazil agree to use yuan in cross-border transactions