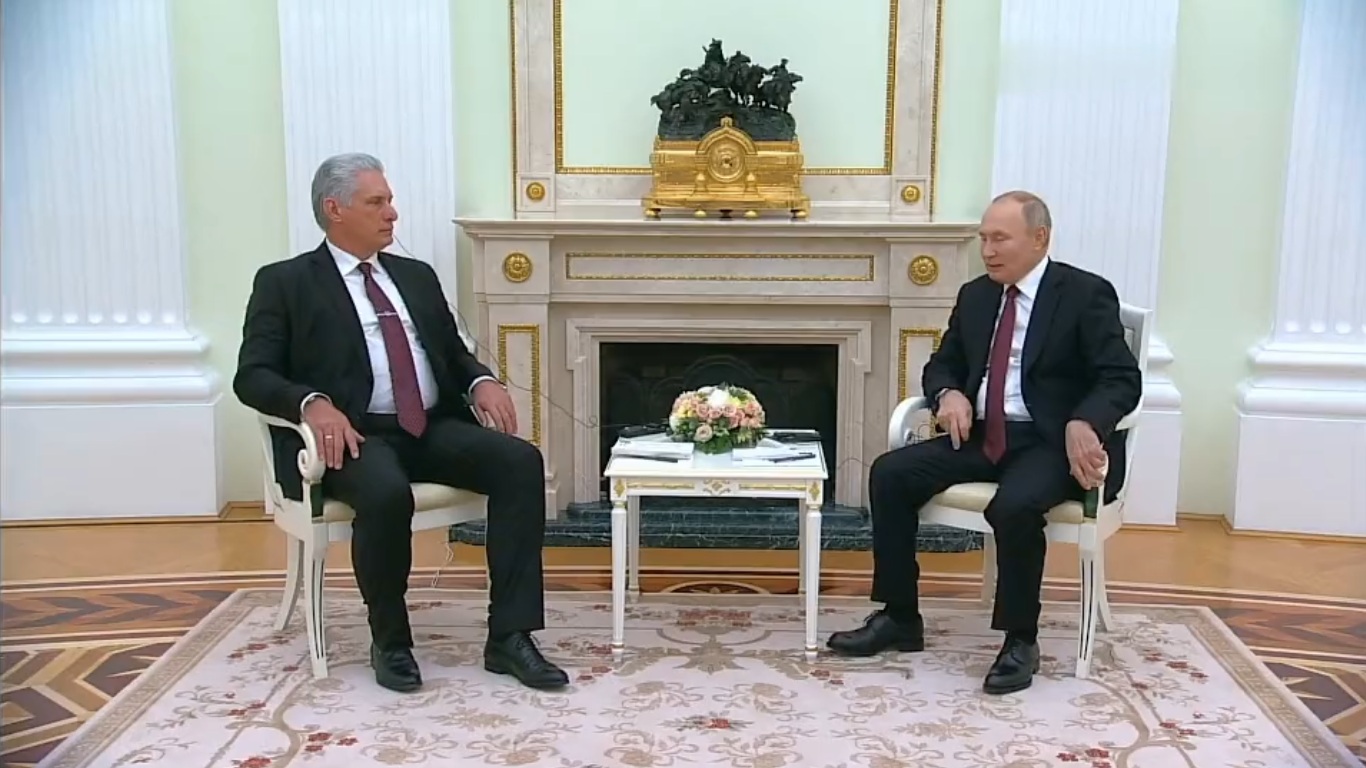 Moscow, Nov 22 (Prensa Latina) Russian President Vladimir Putin and his Cuban counterpart, Miguel Diaz-Canel, met at the Kremlin on Tuesday in the framework of the official visit that the Cuban head of State is paying to the Russian Federation.

Both leaders analyzed the current state and development prospects of the Russian-Cuban strategic partnership in the political, economic and commercial, cultural, and humanitarian spheres.

The two presidents also exchanged views on key issues on the international agenda.

During the meeting, President Diaz-Canel said that he was convinced that the sanctions imposed on Moscow and Havana are unfair and arbitrary.

“To us, this visit to Moscow is very significant. First of all, it comes at a time when both Russia and Cuba are subject to sanctions imposed by the same enemy,” the Cuban president said.

He added that he appreciated all the work done by the Russian Federation, and its role, which Cuba supports, to change the world, so it becomes more multipolar. Russia and you, in particular, emerge as leaders in doing so.

Moreover, the Cuban president stated that both nations share the same points of view regarding the global issues that are affecting humankind.

“Once again, I would like to reiterate that Russia can always count on Cuba and all our willingness, our effort as admirers of Russian history, Russian culture, and also as admirers of your leadership,” Diaz-Canel noted.

“We will do everything we can to continue strengthening and expanding our bilateral ties and relations,” the Cuban leader stressed.

For his part, the Russian president pointed out that Moscow and Havana must move forward and strengthen cooperation, taking into account the current situation, based on this solid principle of friendship, and added that he was very pleased to have this opportunity.

Putin stressed that the Soviet Union first and then Russia have supported and will continue supporting the Cuban people’s struggle for independence, and sovereignty, against all kinds of sanctions, embargoes, and blockades, and Cuba has taken the same stance regarding Russia.

According to Putin, this is the result of the friendship between both peoples, established by the historic leader of the Cuban Revolution, Fidel Castro, whom he considered a symbol of an entire era, of national liberation movements, the collapse of the colonial system and the creation of new independent States.

Shortly before, Putin and Diaz-Canel inaugurated a monument to the leader of the Cuban Revolution, Fidel Castro, at the square named after him, in Moscow’s Sokol district.

On November 16, Diaz-Canel started an international tour that includes Algeria, Türkiye, Russia and China. The tour will conclude on November 27.