Spain pays tribute to Pablo Milanes and condolences over his death 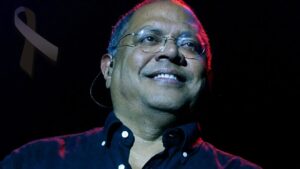 Spain pays tribute to Pablo Milanes and condolences over his death

Although Milanes died in a hospital in Madrid on early Tuesday, successive messages of tribute and condolences to the author of “Yolanda” and “Yo no te pido” have been published.

“We will take to the streets again and mourn the absence on your behalf. The music of Pablo Milanes will always be with us. He gave a voice to the life and feelings of an entire generation,” Pedro Sanchez tweeted.

“Eternally in our memory,” the Spanish president wrote.

For her part, Yolanda Diaz, second vice-president and minister of Labor, emotionally expressed her feelings on Twitter.

“Pablo Milanes has composed, verse by verse, the song of our lives. A singer-songwriter of beauty, the memory of all loves. His transparent, free voice left us with poetics and an ethics of the essential and the small. Today, Pablo, you fly from your beloved island to our hearts forever,” Diaz commented.

The spokesman in Congress for Esquerra Republicana Catalunya, Gabriel Rufian, also dedicated a few words to the artist who shared stages and made records with Spanish singers Victor Manuel, Ana Belen and Luis Eduardo Aute, and Argentinean singer Mercedes Sosa.

“How beautiful he wrote and how beautiful he sang,” Rufian tweeted, and the career of this iconic Cuban singer-songwriter was largely covered in newspapers such as El Pais, El Mundo, the radio channels SER and COPE, and the main television stations and the news agencies Europa Press and EFE.