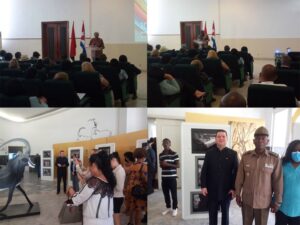 Luanda, Nov 25 (Prensa Latina) Angolan and Cuban representatives on Friday praised their friendly ties at a ceremony to pay tribute to Fidel Castro and Agostinho Neto, key figures of the revolutionary struggles of both peoples.

Six years after the death of the Commander-in-chief of Cubans, this ceremony on November 25 recalled his friendship with the patriot, doctor, writer, and poet, who went down in history in this African nation as the first president of the republic.

The anniversary of Angola’s Independence coincides with the beginning of bilateral relations, which “started an era of brotherhood, cooperation, and heroism that has lived on until present times,” Cuban Ambassador in Luanda Esther Armenteros said.

Fidel said about Neto, “He is the noblest man I have ever known,” the ambassador recalled and thanked the recent initiative by former Angolan students who graduated from Cuban schools, the Caimaneros, of organizing a campaign to send donations to Cuba after Hurricane Ian.

The National Museum of Natural History was the venue of the fórum, where Angolan historian and researcher Fernando Jaime gave a lecture on Cubans’ internationalist feat in Africa, Fidel’s thinking and life, and the unwavering brotherly ties.

He said that defending Cuba is like defending our own blood as no other people in the world has sacrificed themselves so much to defend another as Cubans did in Angola, the scholar and secretary general of the Angola-Cuba Friendship Association said.

For our part, “we have done very little to dignify that friendship,” Jaime, who has done continuous militant solidarity work with the Cuban Revolution for nearly 40 years, humbly and gratefully noted.

Venezuelan Ambassador to Angola Marlon Peña, other members of the diplomatic corps, members of the Caimaneros group and the Cuban community that resides here, as well as several Angolan State institutions, attended this event.