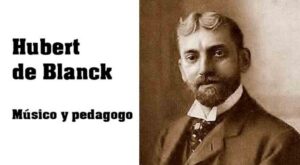 Havana, Nov 28 (Prensa Latina) Cuba is recalling on Monday outstanding Dutch musician Hubert de Blanck, who died 90 years ago in this capital and founded the first Conservatory of Music and Declamation in Cuba.

“On November 28, 1932, prominent Dutch pianist, composer and professor Hubert de Blanck, who visited and resided in Cuba at an early age, died in Havana, at the age of 76,” the National Center of Art Schools tweeted.

The outstanding musician made his first trip to Cuba in 1882 and in 1885 he opened the musical academy, which was initially named after his surname and later as the National Conservatory of Havana and included the Espadero Hall, considered one of the most important concert halls in the country.

Sometime later, the artist was appointed president of the philharmonic section of Caridad del Cerro together with renowned instrumentalists such as Jose and Felix Vandergucht, Charles Werner, and Tomas de la Rosa. In 1903, de Blanck became a Cuban citizen.

Capricho Cubano, Concerto, Suite, Quinteto, as well as the operas ActEa, Icaona and Patria, the latter considered the first national opera about Cuba’s independence struggle, are among his most iconic pieces.

Today, the final headquarters of the Conservatory is located on Calzada Street, between A and B, in Havana’s El Vedado neighborhood.

There is also a theater and a company named after him. In this place, artist Juan Sicre made a sculpture to pay tribute to the work of Hubert de Blanck in the history of Cuba.