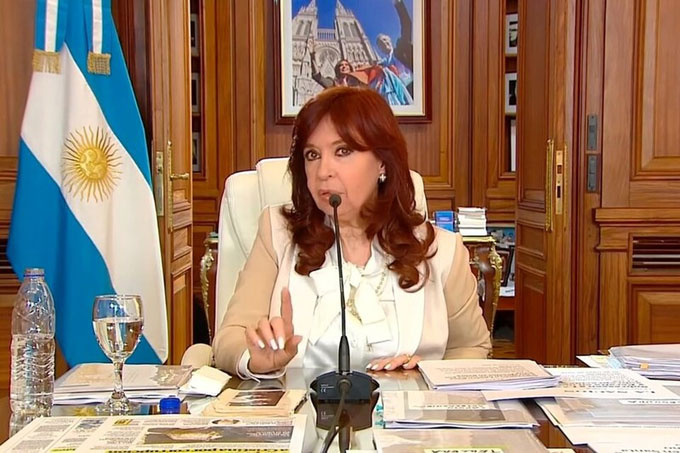 Buenos Aires, Nov 29 (Prensa Latina) Argentine Vice President Cristina Fernandez on Tuesday denounced 20 lies used against her in the so-called Causa Vialidad, whose verdict could be known on December 6.

In an article published in her social networks, the head of the Senate denied the falsehoods used by Prosecutors Diego Luciani and Sergio Mola to accuse the Government of Nestor Kirchner (2003-2007) and the two terms she held in office (2007-2015) of illicit association.

As part of the process, 12 years in prison were requested for the vice president and her perpetual disqualification from holding public posts due to alleged irregularities in awarding 51 works in the province of Santa Cruz, accusations that the former head of State rejected.

Among the false arguments used by the prosecutors, she mentioned the illegal allocation of funds; irregularities in the preparation of the budgets; the pressure on legislators to approve those standards and the use of administrative decisions, whose competence corresponded to the Chief of Cabinet, to redirect economic resources.

Fernandez pointed out that Luciani and Mola lied about the alleged lack of knowledge by Congress about the destination of the budget, the existence of commercial relations with illegal profits, the delay or abandonment of the works, the lack of controls, the benefit of businessman Lazaro Baez and the payment of millions of dollars in overprices.

Decisions on public investment are the exclusive responsibility of the political bodies and there is no rule that sets limits on how they should be distributed, the Vice President explained.

The works in Santa Cruz were justified by the deficit of its road network in 2003, as well as by the need to guarantee the objectives of integrating the different population groups and reaffirming sovereignty.

None of them were unproductive or unnecessary, she added.

Fernandez pointed out that it was demonstrated in the trial that the processes of elaboration of the budget projects complied with the legal and financial controls and counted with the intervention of the competent offices.

Legislators were never pressured or coerced to vote in favor of these laws.

It was also accredited that there were never any appropriations destined to the province of Santa Cruz with the purpose of benefiting a particular contractor, she asserted.