President of Cuba arrives in Barbados for an official visit 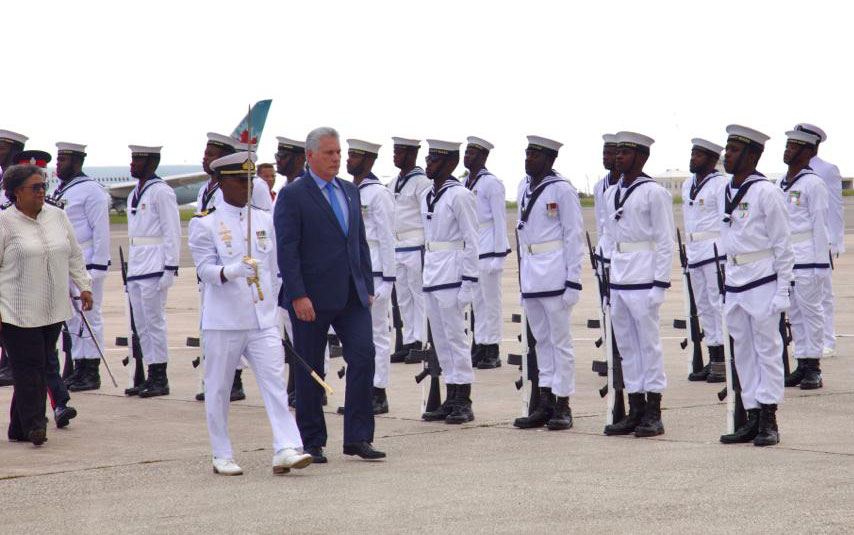 President of Cuba arrives in Barbados for an official visit

Bridgetown, Dec 5 (Prensa Latina) Cuban President Miguel Díaz-Canel arrived in Barbados today for an official visit, as part of a Caribbean tour that previously took him to Saint Vincent and the Grenadines.

Upon his arrival at the Grantley Adams International Airport, in this capital, the Cuban president was received by Prime Minister Mia Amor Mottley.

The Head of State will participate tomorrow in the 8th Summit of Caricom-Cuba, in the context of the 50th anniversary of the establishment of diplomatic relations of the largest island of the Antilles with the first four independent States of the Caribbean: Jamaica, Guyana, Barbados and Trinidad and Tobago.

Díaz-Canel began his tour last Saturday in Saint Vincent and the Grenadines, and held talks with Prime Minister Ralph Gonsalves, whom he thanked for his support to the UN resolution against the US blockade, and for Cuba’s support at the most acute peak of the Covid-19 pandemic.

On the occasion, he ratified the will to consolidate Cuba’s ties with the region and pointed out the multiple joint cooperation actions in the sectors of tourism, food production, human resources training, infrastructure and construction, as well as in health and medicines.

Before his departure from St. Vincent, the Cuban head of state spoke with the Governor General of St. Vincent, Susan Dougan, and visited the parliament, where he recalled the legacy of the historic leader of the Cuban Revolution, Fidel Castro, whom he described as a guide on the path of solidarity with the sister Caribbean territories.

He also ratified the accompaniment of Havana in the just demands for historical reparations for the damages of colonialism and slavery.

In that space organized in his honor, the visiting president affirmed ‘we only have one way to face these challenges effectively and satisfactorily: unity and integration of the peoples.’