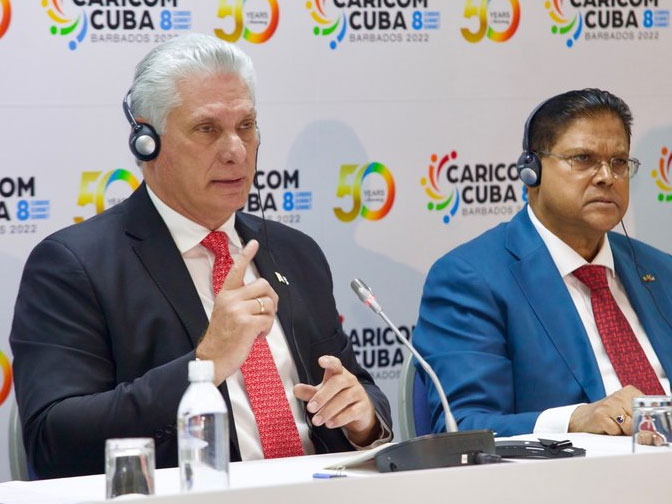 Bridgetown, Dec 7 (Prensa Latina) Cuban President Miguel Diaz-Canel on Wednesday ended his official visit to Barbados, as part of a Caribbean tour that began in St. Vincent and the Grenadines and will take him to Grenada next.

In Barbados, the Cuban president participated in the 8th CARICOM-Cuba Summit, within the context of the 50th anniversary of the establishment of ties between Cuba and several nations in this area, and the two decades of the CARICOM-Cuba Day.

During his stay, the president also met with Barbadian Prime Minister Mia Amor Mottley, President Sandra Mason, and spoke with Cuban collaborators in that country.

On Tuesday, Diaz-Canel paid tribute to the victims of the terrorist attack against a Cubana de Aviacion plane that had left Barbados for Cuba on October 6, 1976, in front of the monument that recalls those who were killed in that crime organized by counter-revolutionaries based in the United States.

Before his departure for Grenada, the Cuban president thanked Caribbean friends and academics for organizing a colloquium on Wednesday dedicated to half a century of CARICOM-Cuba relations, ties that he described as fruitful and fraternal, based on friendship, respect and mutually beneficial cooperation.

The establishment of diplomatic relations with Jamaica, Guyana, Barbados and Trinidad and Tobago on December 8, 1972, put an end to US attempts to isolate Cuba from the region.

Over the years, collaboration with the Caribbean community has focused on key areas such as health, education, agriculture and fighting climate change.