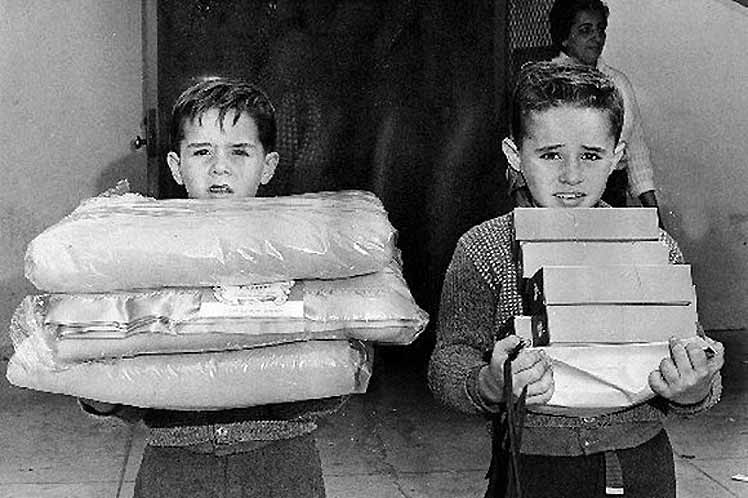 Havana, (Prensa Latina) The Peter Pan Operation, one of the US cruelest actions that violated human rights against Cuba, deceived parents to send their children to the United States by alleging they would lose their parental rights. Over 14,000 boys and girls ended up alone in Florida.
Share on facebook
Share on twitter
Share on whatsapp
Share on telegram
Share on email

Many of the minors never met their parents again, or when they did –with the passing of time- they hardly recognized them, and living together with them was difficult, according to testimonies of some of the victims of that crime.

On its eagerness to destroy the rising Revolution, Washington carried out all types of actions, such as imposing an economic, commercial and financial blockade, armed aggression and terrorist acts.

However, the Peter Pan Operation, implemented on December 26, 1960 through October 23, 1962, reached the extremes of cruelty. It was a case of psychological war aimed at affecting the most precious of the Cuban family: their children.

In order to pursue the heartless project, US officials and its allies within the island carried out a fierce crusade stating that the revolutionary Government would take away from parents their parental rights to be able then to send them to the former Soviet Union, or use them without their parents’ consent.

The means used in that destabilizing mechanism was a propaganda campaign on Radio Cuba Libre (also known as Swan) radio station to cause alarm and a sense of unease among the population.

Among its most immediate precedents was the creation of the Unaccompanied Cuban Refugee Children Program, in the last months of 1960, from counterrevolutionaries born on the island and Florida based, under the Central Intelligence Agency leadership.

This entire plan was organized by the US Department of State; the Miami based Catholic Church hierarchy and in Havana, among other institutions and federal agencies.

Apart from the United States, diplomats from six European embassies and five from Latin America missions were involved in the transfer of documents and passports.

According to its organizers, the Peter Pan Operation ended on October 22, 1962, when the so called Cuba´s Missile Crisis began, and flights between both nations were suspended. However, the operation continued for several years secretly.

16-year-old minors continued to leave alone, via Spain, with a regular visa, they were received and taken care of by members of the Catholic Church, together with a group of priests, religious people and Cuban laymen emigrees.

Nowadays, the story repeats in the form of a tragedy, also starred by children: the serious migration crisis at the US border with Mexico, of which many blame President Joe Biden’s Administration for.

Tens of thousands undocumented immigrants are concentrated there, a large part of them are non accompanied children, a ‘modern’ adaptation, but the same cruel thing that happened 60 years ago.

Like in those days, the places where they are sheltered do not have the minimum indispensable conditions for the minors´ daily life. The majority of them do not have any contact with their relatives either in their places of origin or those who managed to cross the border to the north.

Like the Peter Pan Operation, children are the main victims of programs poorly conceived, incoherent and based on political interests, this time former President Donald Trump (2017-2020) started it, but the new Democrat Administration cannot find a definite solution to this humanitarian situation that worsens every day.