Greek organizations demand an end to the blockade on Cuba 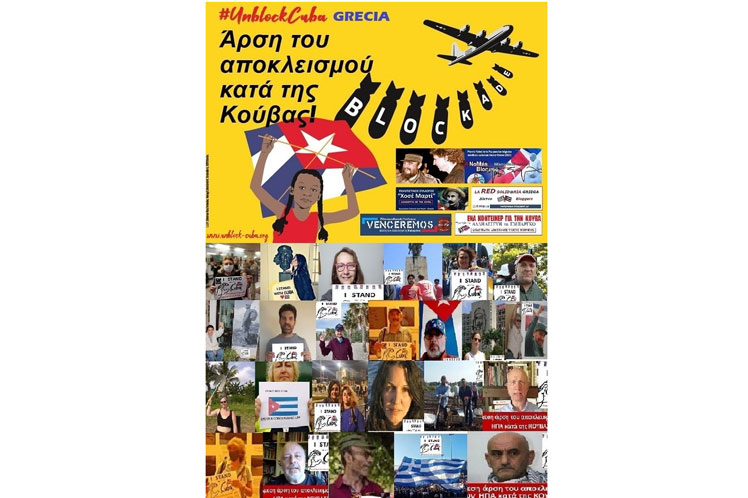 Greek organizations demand an end to the blockade on Cuba

In a statement sent today to Prensa Latina, its signatories indicated that the demand to lift the restrictive measures is now becoming even more urgent due to the period of the global Covid-19 pandemic, with millions of cases and hundreds of thousands of cases. dead all over the world.

This moment should be the occasion for all countries to turn to international cooperation and mutual assistance and abandon the policies of economic competition, the looting of the weak, wars and policies that ecologically strangle the planet, the statement urged.

‘The peoples of the world yearn and are fighting for a different course for humanity,’ he said.

He described as aggressive and inhuman policy the legislation maintained by all the governments of the United States for six decades with the objective of overthrowing the Cuban Revolution and restoring Washington’s domination in that small country.

He recalled that, in April 2019, the US government intensified these measures in an attempt to further strangle Cuba, to deprive it of its development potential, thus constituting another blow against the standard of living of its people.

‘Cuba does not threaten any other country, on the contrary, with the best of its capabilities it helps other peoples, when there is a need and it is requested,’ the statement said.

He added that Cuban medical brigades have offered assistance and solidarity to many countries in need and this has also become clear now in the midst of the pandemic.

‘The people of Cuba do not deserve such unfair and criminal treatment from their powerful neighbor, the United States. The people of Cuba have the right to choose their own path, without foreign aggression, embargoes and sanctions,’ the statement concluded.

The resolution, issued by the Trade Union Association of Library, Stationery, Editorial and Digital Media Workers of the Attica Provincial Council, in Athens, was signed by eight other unions of primary and secondary education educators, salaried engineers and other unions from different regions of Greece.