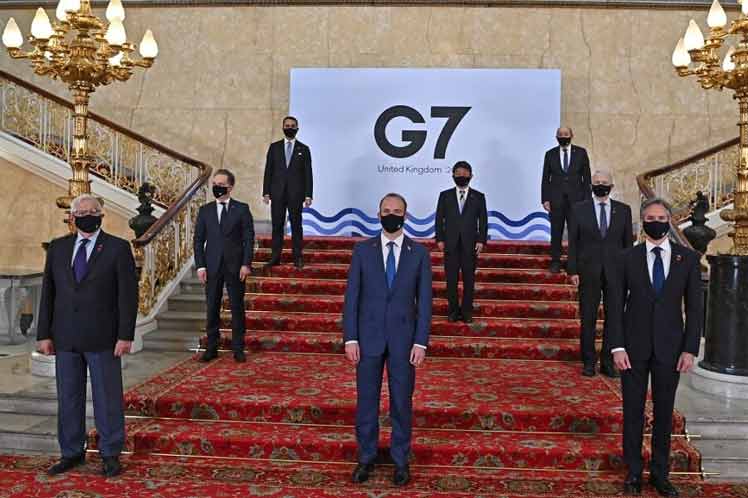 In a statement issued at the end of a two-day meeting in London, Foreign Ministers and Development Ministers of the seven richest western countries assured that an open, transparent and multilateral approach is really needed to put an end to present pandemic.

We support the strengthening of health systems and equitable access to vaccines, treatments and diagnoses, so we will redouble our support to people who need it, the text read.

Representatives from Germany, Canada, the United States, France, Italy, Japan and UK supported the bloc’s promise to contribute US$10.7 billion to fight Covid-19, and also urged all members to step up their financial support.

During the meeting, alleged threat posed by Russia, China, the Democratic People’s Republic of Korea, Belarus and other nations was also reviewed for ‘democratic values’ championed by G7.

Moscow, for example, was bawled out for alleged human rights violations, blamed for volatile situation on the border with Ukraine, and accused of attempting to destabilize the international system with cyberthreats and misinformation campaigns, all of which were strongly snubbed by Russian authorities.

Regarding China, it was urged to cooperate in solving global challenges closely related to security, climate change and coronavirus pandemic, not to mention alleged abuses in Xinjiang, Tibet and Hong Kong, and support for Taiwan.

North Korea, on the other hand, was also a much-discussed issue in the meeting, which included a G7´s call to Pyongyang to refrain from taking ‘offensive actions’ and to retake diplomatic avenues with the explicit objective of achieving its denuclearization in a wide US military area.

‘We are committed to working together, with our friendly countries and the multilateral system, in shaping a safer, cleaner, free and just future for the planet,’ foreign ministers stated.