Over 455,000 people vaccinated in Cuba as part of health intervention 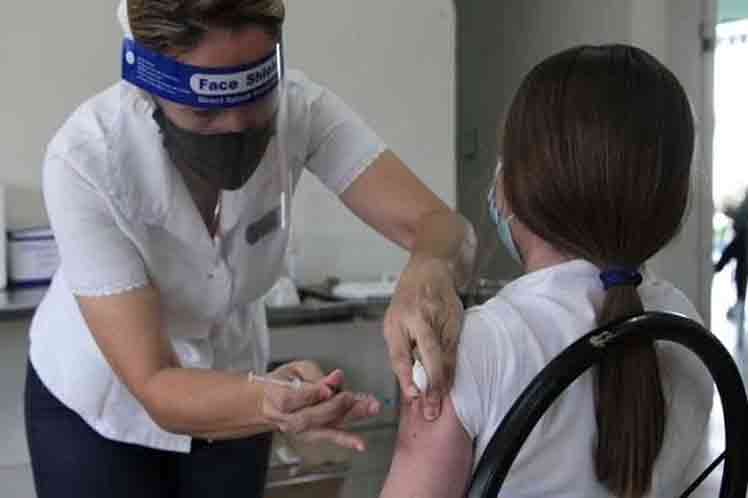 Over 455,000 people vaccinated in Cuba as part of health intervention

According to information from the Ministry of Public Health (MINSAP), in the first stage of this process in Havana, 186,499 people aged 19 and over received an injection of Abdala, which was developed by the Genetic Engineering and Biotechnology Center(CIGB).

On the other hand, 269,409 health workers and vulnerable groups have already received one or more doses of the CIGB product or the Soberana 02 vaccine candidate, created by the Finlay Vaccines Institute (IFV).

The health intervention, which is of a temporary nature and involves students of medical sciences and workers in the biopharmaceutical sector, began last Monday with the immunization with the Abdala vaccine candidate in several Cuban provinces and the Havana municipalities of Regla, Guanabacoa, Habana del Este and San Miguel del Padron.

Subsequently, it will be extended to the areas of Arroyo Naranjo, Boyeros and Cotorro, where health authorities expect to vaccinate some 383,000 people.

Starting in June, Soberana 02 will immunize the population of the Havana municipalities of Plaza de la Revolucion, Playa, Centro Habana, Habana Vieja, Cerro, Diez de Octubre, La Lisa and Marianao. Highlighting the importance of a health intervention in Cuba, Public Health Minister Jose Angel Portal Miranda pointed out that it complies with the ethical standards approved for research on human beings and it is an plan that will be carried out according to the productive escalation.

In total, Cuba has five vaccine candidates to counteract Covid-19. Soberana 02 and Abdala, both in phase III of clinical trials and the intervention studies, in addition to Soberana 01 and Soberana Plus, also from the IFV. The latter was designed for convalescing patients; and Mambisa, from the CIGB, the only one designed to be administered nasally.