Cuba speaks out against US blockade at UN 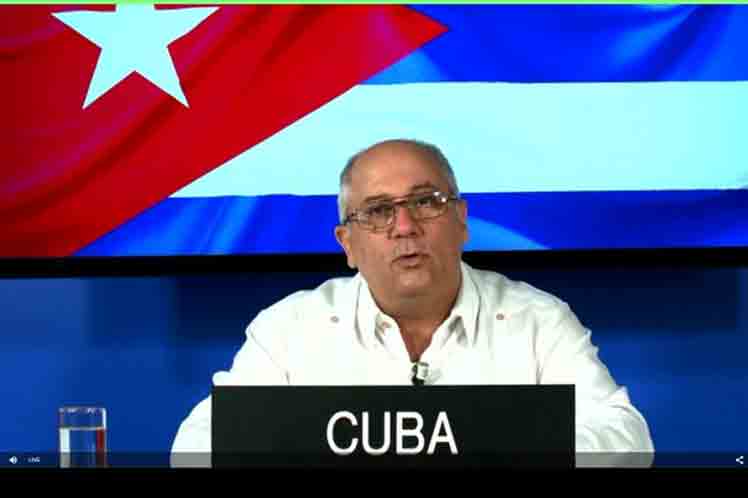 Cuba speaks out against US blockade at UN

On speaking at a high-level virtual event of the General Assembly, Cuban Culture Minister Alpidio Alonso highlighted how the US blockade has an impact on the living conditions of all Cubans, hinders development, the material possibilities for expanding cooperation and causes human damage.

My country, in addition to the health crisis, faces the worsening of the blockade: in 2020 alone, the cultural sector reported damages and losses worth 14,463,300 dollars due to that policy, he explained.

In addition, he set out, Cuba is facing an exponential rise in the cultural and media war waged from Miami against culture and our artists, ‘the vast majority of whom have defended their right to go through the same fate as their people.’

The minister also denounced the marked extraterritorial nature of the blockade, as well as the infamous inclusion of Cuba in Washington’s unilateral list of States sponsors of terrorism.

Likewise, he rejected the continuation of subversive actions against Cuba, which seek to destroy the political, economic and social order chosen in a free and sovereign manner.

The pandemic has challenged Cuban institutions to continue promoting art and expressions of cultural heritage among the broadest sectors of the public, he underscored.

In this difficult scenario, the Cuban Government has so far allocated over 300 million pesos from the State budget to protect the salaries of professional musicians and performance artists throughout the country, a measure that continues to be implemented, he explained.

Similarly, he said, a comprehensive approach to cultural work is being developed, including the efficient use of new technologies and the implementation of numerous alternatives for the circulation of art and literature, especially aimed at teenagers and youngsters.

The organic articulation with the new virtual scenarios is an unavoidable challenge for everyone, but fundamentally for developing nations, deprived of great resources and in cases such as Cuba, Nicaragua and Venezuela, segregated from the great circuits dominated by the hegemonic cultural industries, he pointed out.

The current international political order has shown its inability to respond efficiently and justly to the current health and socioeconomic crisis, and more cooperation is urgently needed, the Cuban minister pointed out, calling for prioritizing human beings.