Castillo and Fujimori intensify campaign for ballot in Peru 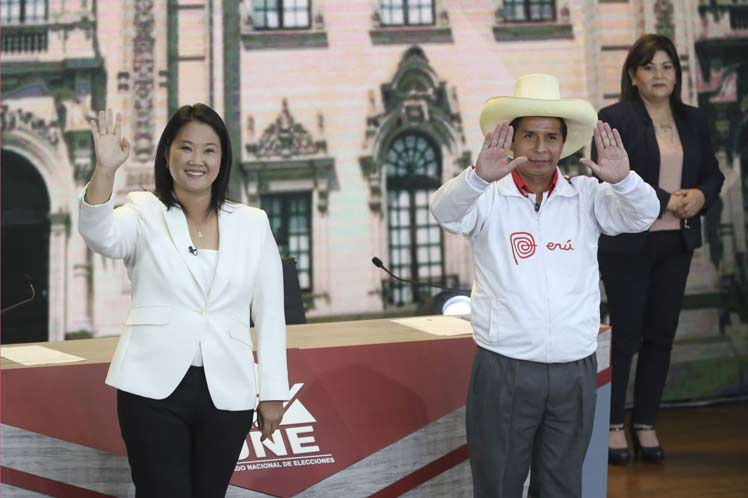 Castillo and Fujimori intensify campaign for ballot in Peru

Castillo culminated Tuesday a series of massive concentrations in the southern regions of Puno and Cusco, where his contending party could not find supporters even if he tried. He was rejected with protests from his detractors.

The rural teacher and farmer continued at the same time weathering the storm of attacks by the vast majority of newspapers and television stations, which support Fujimori.

A confusing statement in which he said that the guilty of the femicides is the idle state, gave rise to accusations against him, of alleged cover-up and justification of that crime and of machismo.

Castillo clarified what was said and condemned the ‘idle state that does not promote or protect women, and often ends up shielding femicides, rapists and corrupt people’, which the press ignores and continues to use the issue against the candidate.

Meanwhile, Fujimori engaged in proselytizing activities in Lima, where last night she had an incident in the popular neighborhood of Puente Piedra, when groups of locals opposed her visit.

He also attended a meeting of evangelical women and added to the campaign Gisela Valcárcel, a former comedian and successful television presenter.

The candidate toured several television stations to publicize her candidacy, including even a show business program criticized as scandalous.

Fujimori has among her campaign tools anti-communism that seeks to instill fear in voters and copious promises of money and other economic measures, the viability of which many specialists question.

The issue generated a contradiction between Fujimori and her economic right arm, the former neoliberal Minister of Economy Luis Carranza, around a bonus of about three thousand dollars offered to each family that lost a relative due to Covid-19.

After revealing that the pandemic left more than 180 thousand dead until a few days ago, Carranza clarified that it would not be a bond but a loan to be paid in the long term, but she contradicted him and ratified the aid, which the beneficiaries will not have to repay. she promised.