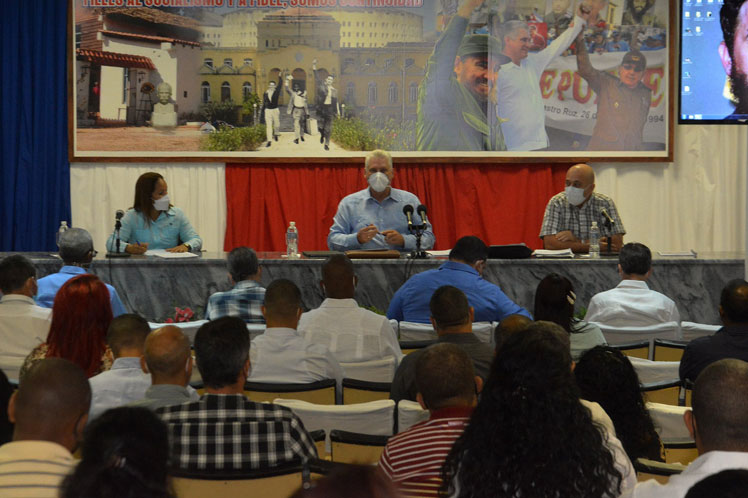 During an exchange with local leaders of the political grouping and mass organizations, as part of the process of continuity of the 8th Congress of the PCC, the also Cuba’s president called to move forward with their own efforts and talents, according to a television report.

The first secretary of the PCC highlighted the role to be played by the party structures in that sense, and in the implementation of the strategy for the local development of the territory, which will benefit its over 83,000 inhabitants.

To the improvement of the work of the PCC and the mass organizations, he dedicated words in the meeting, the 9th that takes place in the country to address the concepts and guidelines of the organization’s conclave, held in April.

Diaz-Canel insisted on the need to strengthen the work at the basis and that the party is really the space for frank, sincere debate and the contribution of ideas; as well as in the follow-up to the implementation of the meeting party’s agreements meeting in an accurate, precise and systematic way.

The leader said that the challenges facing Cubans include economic and ideological issues, and urged to denounce the US blockade in all scenarios, a policy that this nation has not applied even to its worst enemies, he assured.

In the face of every threat and measure taken by Washington, we will not stand idly by, the President ensured, and called for closing ranks in defense of the Cuban Revolution.

At the meeting, the members of the Secretariat of the Central Committee of the PCC explained the work system of each of the departments they are in charge of and stressed the importance of communication and attention to the new generations, particularly the Young Communist League organization.