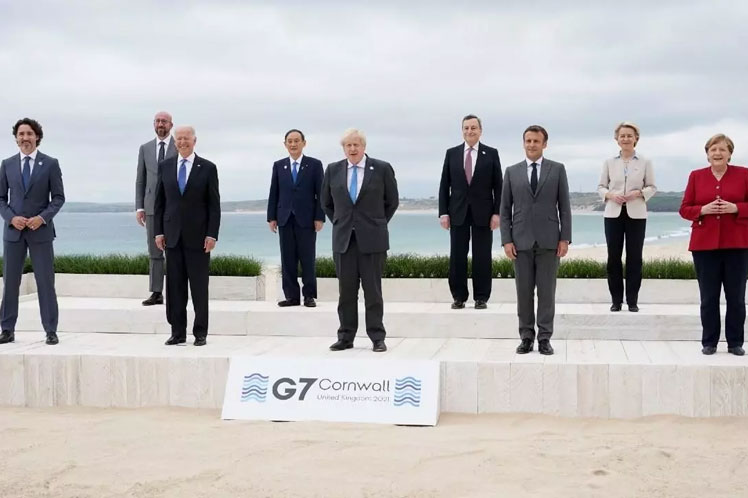 According to the British government, host of the meeting that began on Friday in a hotel of the English county of Cornwall, the leaders of Germany, Canada, the United States, France, Italy, Japan and the United Kingdom will agree this Sunday plans to finance environmental projects in developing countries.

The new approach seeks to give those nations access to greater and more expeditious financing, while accelerating the global shift towards renewable energy in vital infrastructure ranging from railways in Africa to wind farms in Asia, the statement said.

The seven most industrialized nations on the planet are also expected to commit to halving their pollutant gas emissions by 2030 compared to 2010 levels.

In the final session of the summit, the first to take place in person since the beginning of the Covid-19 pandemic, the renowned British naturalist David Attenborough intervened virtually, warning the G7 rulers about global warming and the inequalities when fighting it.

According to the also presenter of documentaries on the environment, the question to answer in 2021 is whether this situation is about to destabilize the planet, because if so, he said, then decisions we make in this decade, in particular, the decisions made by the most economically advanced nations, are the most important in the history of mankind.

Environmental groups, who also turned up this weekend in Cornwall, 250 miles southwest of London, to demand more urgent responses from the G7 to tackle the looming climate emergency, were unimpressed by the British government’s announcement.

Despite the wording, these are simply old promises overheated and flavored with hypocrisy, rather than actual actions to stop climate change and the environmental emergency, said the Greenpeace UK affiliate.

Although the strong police force around the Carbis Bay hotel prevented them from making themselves heard by the G7 rulers, thousands of environmental protesters marched the streets of Falmouth, a coastal town located about three miles from the summit site, the day before, demanding fewer promises from them and more actions.

The meeting of the seven industrialized countries will conclude this Sunday with a statement that will also include the bloc’s promise to donate one billion doses of Covid-19 vaccines to the underdeveloped world next year.