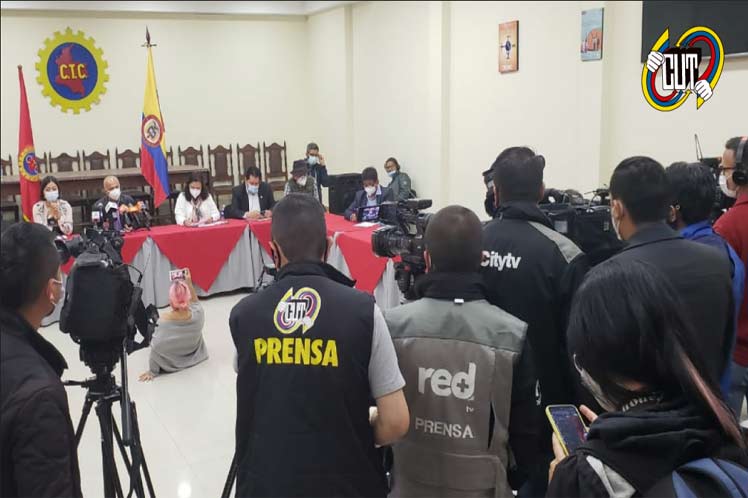 In a press conference, representatives of the group explained that they took such a decision due to Ivan Duque´s administration´s attitude that forgot the pre agreements of minimal guaranties for peaceful social protest.

Besides, he issued Decret 575 authorizing military assistance for the handling of the social protest, continues to delay the Emergency Document negotiation presented on June 20, 2020, and in a tyrannical attitude, he decided as his policy the use of extreme public force, they added.

They added the government ran over thousands of people during the peaceful protests, broke procedures and made use directly or through third parties of short and long range weapons.

Such actions accounted for 77 homicides, two thousand 808 detained, 304 missing, 106 women victims of sexual assaults and 74 cases of ocular amputation in young people as well as the wounded in the public force, they explained.

The new plan of action includes talking to different sectors in Colombian society in assemblies, meetings, forums, talks, and other activities to socialize the emergency paper, they explained in detail.

Likewise, they proposed to bring in advance negotiations in state, territorial and sectoral agendas, call for broad forums in the country for next June 20, the anniversary of the presentation of national emergency document.

The plan establishes bill making whose content matters are included in such a paper and that will be rendered to Congress next July 20, and thus, continuing the fight undertaken October, 2019.

For that day, the group formed by syndicates, labor unions, students organizations and others, called for a strike for next July 20 to reaffirm the slogan ¨For life, peace, democracy and against neoliberal policies from Duque´s government¨.

The National Strike Committee is a movement that was founded on October 4, 2019 when dozens of union and social organizations gathered in Bogota in an Emergency Meeting to write a petition paper in the context of a series of reforms announced by president Duque.

Such proposals sought to meet the compromises contracted with OCDE and the World Bank worsening thereby the working conditions, decreasing pensions and impoverishing the population with a new Tax Reform.

They pointed out that the successful National Strike has made it possible to unleash a greater outburst of popular indignation against neoliberal governments and their repressive and regressive policies, at the same time they reaffirmed their will for dialogue and negotiation.