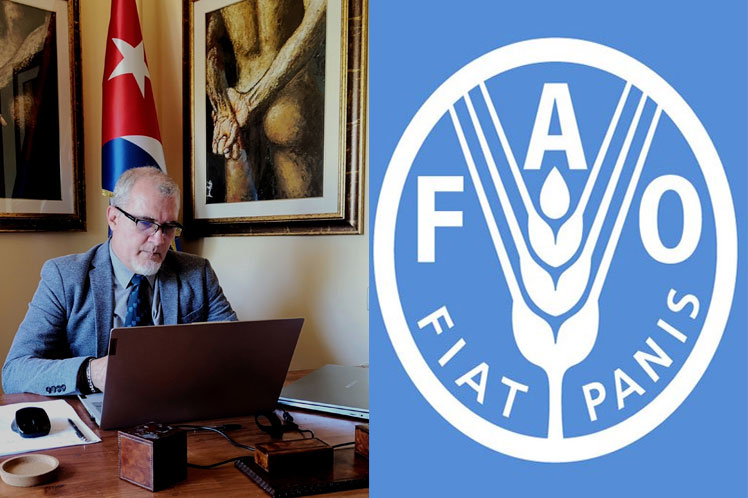 On speaking at the 42nd session of the FAO conference, Cuba’s Minister of Agriculture Ydael Perez stressed the need to ensure the principles of inclusion, diversity and cooperation to successfully face the current challenges.

Cuba’s permanent representative to international organizations headquartered in Rome, Ambassador Jose Carlos Rodriguez, read the speech sent by the Minister to the online meeting of the Food and Agriculture Organization of the United Nations (FAO).

Referring to the ‘very difficult conditions’ imposed by the Covid-19 pandemic in his country, the minister indicated that agricultural producers -private, cooperative and State enterprises- continue to produce food for domestic consumption and export.

Cuban farm workers have had to produce in the midst of significant reductions in the availability of inputs, including fuels, Perez noted.

The minister highlighted the ‘very serious effects’ caused to Cuba’s agricultural production by the US economic, commercial and financial blockade, which has been in force for over 60 years against the Cuban people.

In that sense, he referred to the tightening of that isolation policy during the previous Trump administration with the implementation of 243 additional executive measures, all of them still in force.

The damages caused by the US blockade to the agricultural-food sector, from April 2019 to March 2020, he said, amounted to 428,894,637 US dollars, a period in which, he underscored, the overall damages to the country amounted to 5.57 billion dollars.

Meanwhile, the minister highlighted Cuba’s ‘great effort’ in the epidemiological and sanitary fight against Covid-19, including the development of its own vaccines and the immunization process which, he added, is progressing satisfactorily.

Perez affirmed that next August vaccination should cover 70 percent of the population until reaching the totality in November, as part of an effort, which he considered ‘is also decisive to guarantee the productive capacity and food security.’

On pointing out that despite the difficult situation, his country is not standing still, he stated, ‘we are moving forward in updating our socio-economic model and the national development plan until 2030.’

‘We are working with intensity and maximum priority in the approval of public policies to develop food production, among them: the Food Sovereignty and Nutritional Education Plan, as well as in the implementation of others already approved, such as the Policy for Territorial Development,’ the minister emphasized.