Tense day of marches in a crisis climate in Peru 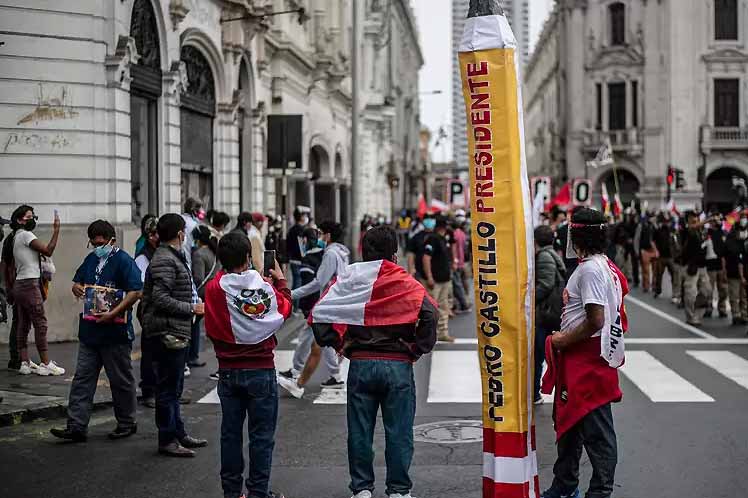 Tense day of marches in a crisis climate in Peru

The mobilization of the leftist rural teacher, called ‘For the Defense of Democracy and the Homeland and No to the Coup d’État!,’ was convened on Thursday on a press conference by dozens of parties, social organizations and citizen unions.

Actually, it is a day of marches throughout the country, against what broad sectors consider to be Fujimori’s lawyerly maneuvers and coup proposals, such as annulling the June 6 ballot, under the assumption that the candidate’s allegations determine that the electoral process is flawed.

Meanwhile, Fujimorism called through Internet networks for the known ‘Million March,’ the same name of the one carried out by US President Donald Trump, with whom Fujimori is compared by the international media for her attitude.

In Lima, thousands of Castillo’s followers from the interior of the country will participate, who are keeping vigil while waiting for their candidate to be proclaimed.

Fujimori is planning a show of force in the city where she obtained her highest vote, while Castillo won in most of the other regions and in the networks many internet users assure that they are paying from 50 and 60 soles (from 13 to 15 dollars to attend).

In addition, former judge Javier Villa presented to the Judicial Power an action for the annulment of the elections for allegedly being flawed and used Fujimori’s arguments.

The request, according to jurists consulted, collides with the constitutional regulation, which states that an election can only be annulled if one third of voters cast blank ballots or there was ballot-rigging.