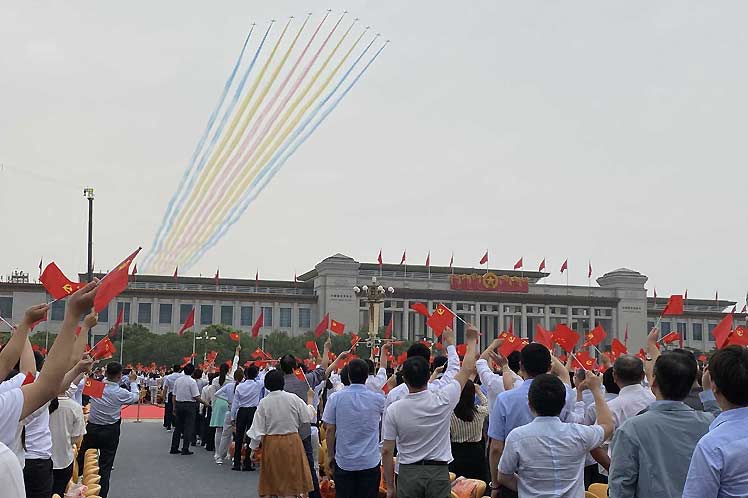 Beijing, Jul 1 (Prensa Latina) President Xi Jinping warned Thursday that Chinese people would never allow any foreign force to bully, oppress, or subjugate them and any attempt to do so will run into opposition from its more than 1.4 billion inhabitants.

During the central act for the centenary of the Communist Party of China (CCP), President Xi welcomed ‘helpful suggestions, constructive criticism and learning about achievements of other cultures’, but dismissed the rhetoric of ‘those who feel entitled to give lessons.’

However, he called for further raising the country´s technical level and capacity of armed forces to defend sovereignty, security and national development interests, in accordance with today’s circumstances.

Xi declared that China achieved its goal of building up a modestly prosperous society, with zero extreme poverty and controlled pollution, but argued for strengthening the unity of all compatriots to move on sought-after socio-economic revitalization.

In this context, he ratified the commitment to strengthen the principle of One Country, Two Systems in Hong Kong and Macao through laws and mechanisms that guarantee them autonomy, help promote lasting prosperity and also stability.

He reaffirmed that solving the Taiwan question and realising China´s complete reunification is an unswerving historical task of the CPC and urged settling actions to neutralize any plans for independence there.

No one should underestimate the resolve of the Chinese people to defend national sovereignty and territorial integrity, he added.

On the other hand, Xi reviewed the CPC´s work in its 100 years and how it successfully guided China to become the world´s second power and a benchmark in technology and innovation, among other fields. But he pointed out the need to purge it of corruption and other viruses harmful to health, integrity and conduct of that political force.