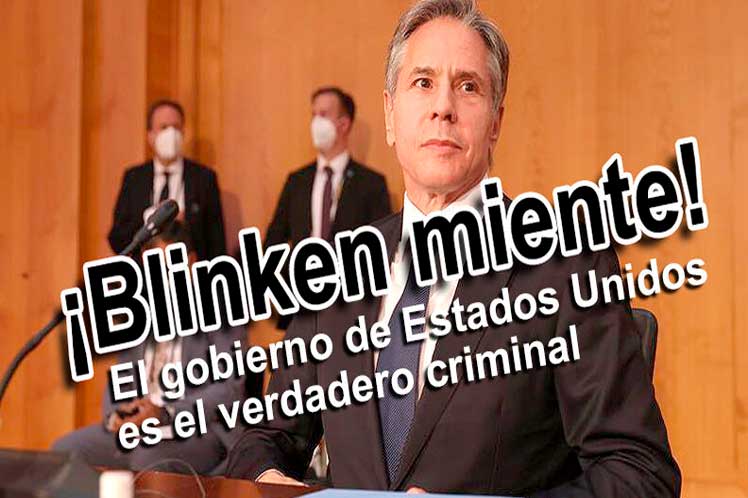 Entitled ¨The United States against Cuba: The devil handing out scapulars¨, the Libertad editorial indicated that such a phrase used to cry out by grandparents as they referred to those hypocritical, false people, who play good when evil really inhabits them.

‘Well, that phrase fits the United States government very well. The U.S. does not quit lying, distorting the truth, creating hatred, destabilization and death throughout the entire world,’ said the newspaper.

The criminal US government changes history when it accuses another nation of doing something that it does NOT do, the same thing happens with Cuba. It is not the first, and surely not the last lie from the empire.

Past July 1, ‘the new ‘messenger of death’, the new Secretary of State Antony Blinken submitted ‘his report’ on Human Trafficking 2020, and accused Cuba of not having controls necessary to prevent human trafficking.’

However, the newspaper asserted that ‘it is precisely the United States that, with its maneuvers and non-compliance with migratory agreements with Cuba, promotes such a crime.’

The objective of this new maneuver is to try to discredit a people that have defeated the U.S. in the battle of ideas, in the battle of truth; the most recent one at the UN General Assembly when 184 nations voted against the criminal economic, commercial and financial US blockade of Cuba.

‘Everyone knows it, the United States is one of the countries with greatest human trafficking issues. All its criminal economic blockade policies on Cuba are based on generating chaos, hunger and death, but the Cuban people have known not only to resist, but also to find new avenues to adapt and be an example for all the peoples around the globe.’