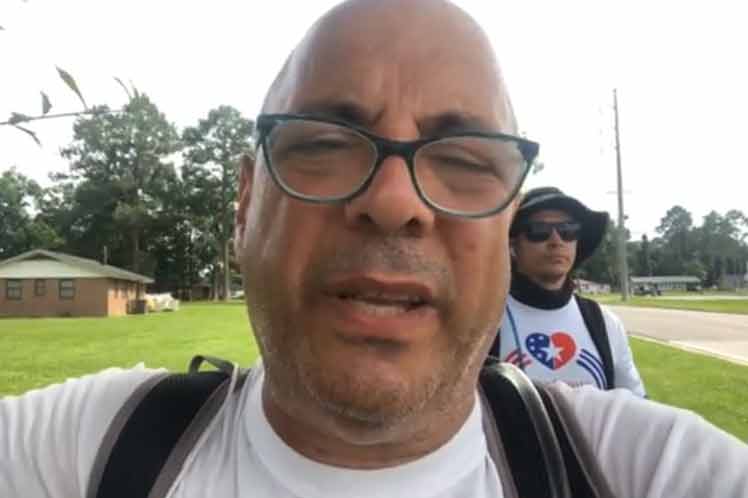 The initiative’s main promoter, Cuban-American professor Carlos Lazo, told Prensa Latina that on Tuesday they will publish on Twitter a video in English addressed to President Joe Biden to explain the pilgrimage’s aim: to demand the end of those coercive measures.

Starting at 9 a.m. Cuba’s, Miami’s and Washington’s time, and until 12 noon, we invite you to share that video or make tweets with hashtags for Biden, Vice President Kamala Harris, First Lady Jill Biden and Secretary of State Antony Blinken, Lazo noted.

Hashtags such as #UnblockCuba, which calls for the lifting of the US government’s blockade against Cuba, will also be used, the activist added.

On the video, we are going to tell Biden that we are walking from Miami to Washington to ask for the lifting of sanctions on the Cuban family, the restoration of remittances, the family reunification program and the reopening of the Washington embassy in Havana.

In addition, Lazo recalled, the Bridges of Love Project advocates for the resumption of flights from the United States to all Cuban provinces and for Americans to be able to travel freely to that country.

That petition, available at www.puentesdeamor.com and with over 25,500 signatures, we are taking it to the White House to present it to Biden at the end of the almost 2,000-kilometer walk, he highlighted.

A week ago, the Bridges of Love caravan left Miami, Florida, and they are already entering Georgia, a journey in which we found bits of Cuba and a lot of love and solidarity towards the Cuban people, Lazo stated.

The participants of the cross-country march have met with several groups of Americans to explain the need to put an end to the US blockade, and all the sanctions that harm the Cuban people and were tightened amid the Covid-19 pandemic.

Talks with Americans, the meeting with a group of veterans for peace, the symbolic crossing of the Bridge of Lions in Florida, and the laying of floral wreaths at the bust that remembers an illustrious Cuban: Father Felix Varela, are some of the activities carried out so far along the trip that began on June 27.

Lazo expressed that they feel happy and optimistic, with very high spirits, sure that this pilgrimage, and call of love between our peoples will achieve great things.