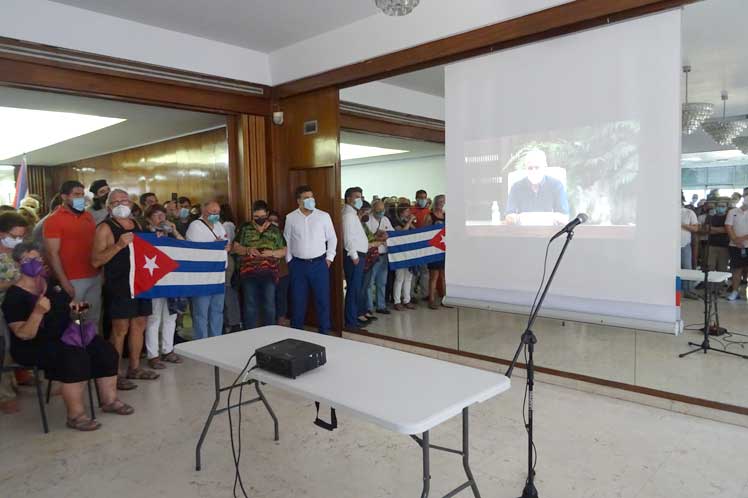 More than a hundred people gathered in the halls of the diplomatic legation, where the head of the Cuban mission, Gustavo Machín, thanked the numerous demonstrations of support and repudiation of the United States blockade.

Machín expressed that with serenity and in absolute adherence to the truth, ‘we are not going to allow those who promote violence and provocations to exceed the limits, although we will maintain the firmness of our principles.’

The diplomat was thus indirectly referring to a group of people in the vicinity of the Embassy shouting aggressive and disrespectful slogans against the participants in the act.

We know very well that Cuba is not alone and the best proof is you, who with your enthusiasm, dedication and dedication enrich the spirit of the revolutionaries, declared Machín. After showing a fragment of the intervention of the president of Cuba, Miguel Díaz-Canel, this Sunday, several of the attendees spoke to ratify their absolute support to the Cuban Revolution.

Speakers representing the State Movement of Solidarity with Cuba (MESC); of the Party and the Communist Youth of the Peoples of Spain; United Left of Madrid; and the Workers, among others, renewed their support for the largest of the Antilles.

They took the opportunity to call for a march on July 26, the Day of National Rebellion in Cuba, with special emphasis on the repudiation of attempts to destabilize the Caribbean nation.

Cuban flags and slogans of Down with the Blockade, Cuba Yes, Yankees No, dominated the atmosphere between harangues and calls to defend the conquests of the Revolution at all costs.

In separate statements, the Federation of Associations of Cuban Residents in Spain (Facre) and the MESC deplored Washington’s blockade against Havana, and the maneuvers to try to destroy the independence and sovereignty of Cuba.