Cuban FM condemns use of unconventional ways to overthrow governments 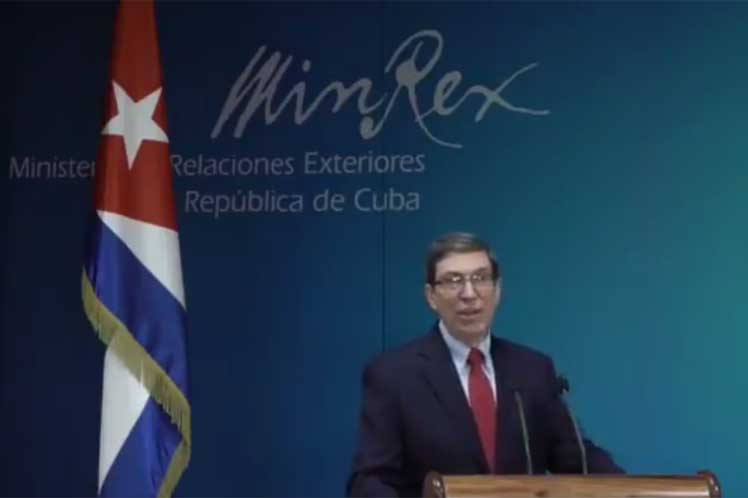 Cuban FM condemns use of unconventional ways to overthrow governments

On speaking online at the Ministerial NAM Conference, the foreign minister warned of the threats and actions in violation of international law undertaken with the purpose of ending the sovereignty of territories. On a video, the FM shared on his official Twitter account, the diplomat condemned the use of force and the escalation of unilateral coercive measures applied to nations.

‘The growing threats against our countries evidence, as never before, the need to preserve the NAM and mobilize it to face the pressing global challenges and advance in the construction of a fair, democratic and equitable international order,’ the head of Cuba´s diplomacy sentenced.

On Tuesday, Rodriguez denounced on a press conference a communicational operation undertaken against Cuba mainly through social networks, with the artificial amplification of messages and the use of false accounts to encourage an alleged humanitarian intervention in the country.

The FM detailed that this operation has been taking place for some time, with multimillionaire resources, laboratories, technological platforms and funds from the US government.

According to the Cuban authorities, the nation is under the effects of an unconventional war, lately intensified, which promotes destabilization actions such as those occurred on July 11 in several cities of Cuba.

To fight against those disturbances, the people took to the streets in defense of the Revolution.

Venezuela urges to denounce US campaign against Cuba

Cuba vindicated in Salvador in the face of US threats

Venezuela urges to denounce US campaign against Cuba

Cuba vindicated in Salvador in the face of US threats