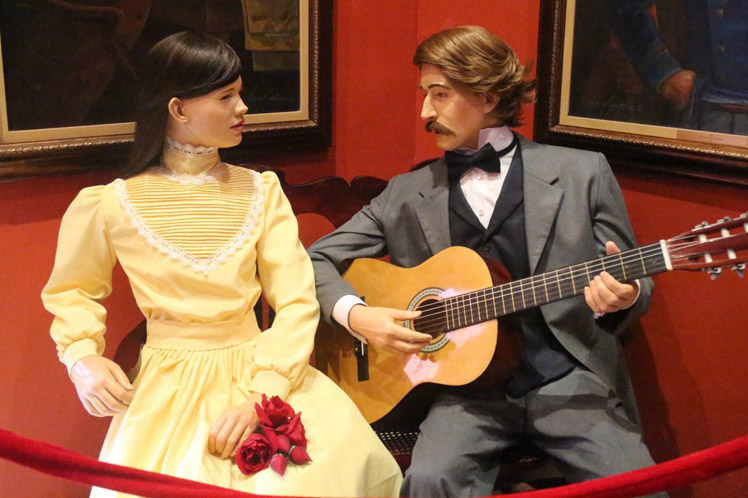 Inaugurated on March 15, 2017 at 308 Isabel La Católica Street in the Colonial City, the building has two exhibits, one on the existence of the hero and the other on his family, so that visitors can learn about the most important chapters in the life of the Dominican Republic’s independence activist.

Among the 13 dioramas and 900 wax figures that make up the exhibition, the representation of Duarte, guitar in hand, singing a song to his beloved Prudencia Lluberes and the moment when he instituted the La Trinitaria society stand out for their workmenship and realism.

The latter took place in the house of Josefa Perez de la Paz (Chepita), on July 16, 1838, and visitors seem to hear the founding father discussing the destiny of the fraternity and proclaiming the oath that committed them to the freedom of the country.

Equally surprising is the scene of the death of the man from Trinidad on his final bed in Caracas, Venezuela, on July 15, 1876, accompanied by his siblings Rosa, Filomena and Manuel, some relatives and the priest who gave him the last rites.

Another representation worth appreciating is the Haitian occupation of February 9, 1822, where he appears at the age of 9 with his mother, in his house in Las Atarazanas, watching the advance of the invading troops towards the city of Santo Domingo.

And as a climax, another moment of great symbolism is his return to the country on March 15, 1844. There was a welcome given to the great hero by the commission appointed by the Central Governing Board, headed by the father of the country Francisco del Rosario Sánchez and by Archbishop Tomás de Portes e Infante.

The museum also exhibits important historical pieces, including Duarte’s baptismal certificate, the urn that kept his remains, portraits and drafts of the constitution, among others.

The Museum is considered an emblematic site of the city that preserves the historical memory and at the same time invites visitors to return to the fascinating life of the illustrious Dominican.