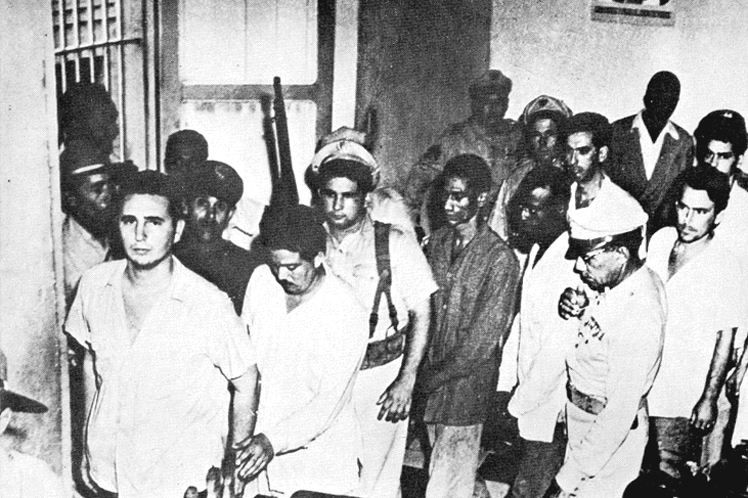 Leader Fidel Castro was driving the second of 16 cars, his right hand on the wheel held the pistol while his left hand held the 12-gauge shotgun, and in his mind, he was reviewing a project of months.

From an apartment on 25th and O streets in Havana, Fidel Castro and Abel Santamaria had devised the attack on the Guillermon Moncada Garrison in Santiago de Cuba and the Carlos Manuel de Cespedes barracks in Bayamo (east), to start the war in the mountain range later and overthrow the 1952 coup d’état by Fulgencio Batista.

Some 160 of 1,200 young men organized in cells were chosen for the action and they traveled from the western region about 48 hours before the D-day, 120 men would attack the garrison in Santiago de Cuba and 40 would do the same in Bayamo.

Haydee Santamaria and Melba Hernandez, the only women involved in the action, brought dozens of weapons with them by train and everything was about to be discovered when soldiers at the train station offered to carry the heavy trunks.

At around 4:45 hours, local time, the attackers left the meeting point at the Siboney farm. It was carnival Sunday, and in order not to attract attention, three groups of cars separated in the nearby area of the Moncada Garrison.

The first group, commanded by Abel Santamaria, would occupy the Civil Hospital near the fortress; the second group, in which Raul Castro participated, would seize the Palace of Justice, a tall building from which they would support the main action; and the third group, with 90 members commanded by Fidel Castro, would take over the Moncada Garrison.

An unanticipated guard unleashed a skirmish, shots were fired and the Moncada alarm alerted the rest: the surprise factor had been lost, and after an unequal combat, the retreat was necessary.

Batista ordered to kill 10 revolutionaries for every soldier killed in that action, eliminated constitutional guarantees throughout the national territory and applied censorship on the press and radio stations.

Abel Santamaria was tortured and assassinated, as many of the attackers, a situation later denounced by Fidel Castro in his defense speech during the trial on the attack.

The self-defense plea by young lawyer Fidel Castro, later known as ‘History Will Absolve Me’, pointed out the hardships of the people under that Republic and announced the social programs the triumphant Revolution would implement.

After the prison in the former Isla de Pinos, currently Isla de la Juventud (Isle of Youth), an amnesty by popular pressure enabled the attackers to travel into exile and prepare an expedition that would return with 82 men to start the irregular war in the Sierra Maestra mountain range in eastern Cuba.

Researchers coincide in pointing out the political significance of the July 26 actions, which were also a tribute to Cuban Apostle Jose Marti’s ideas on his 100th birthday.