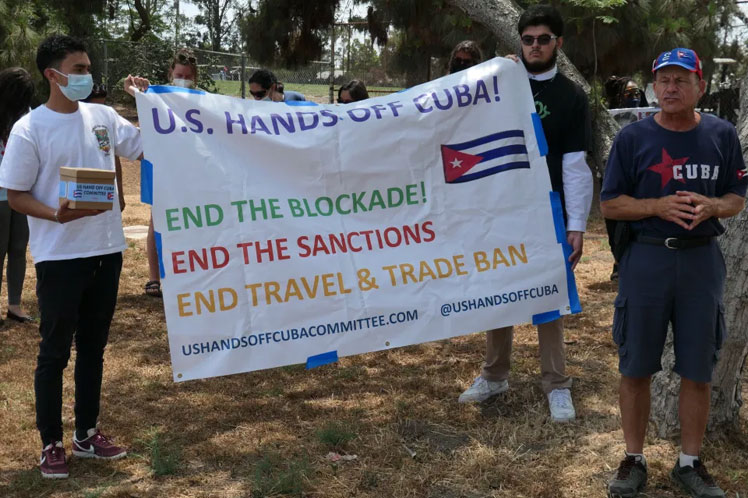 Washington, Jul 29 (Prensa Latina) The people of the United States need to know more about what the government is doing in their name, in this case with the blockade against Cuba, which is causing so much damage to Cubans today, according to an article published in La Opinion newspaper.
Share on facebook
Share on twitter
Share on whatsapp
Share on telegram
Share on email

The Spanish-language newspaper reviewed the recent anti-blockade days held particularly in Los Angeles, where under the slogan ‘Say no to the #SOSCuba destabilization campaign and the calls for a military invasion’, residents of Cuban origin in that California city demanded an end to Washington’s policy of suffocation.

Several participants gave their points of view, including Luis Herrera, who was born in New York and is of Cuban-Peruvian origin. He said that 60 years of such a unilateral blockade ‘have imposed a lot of suffering on the people’.

He told the local newspaper that many US citizens are still unaware of the existence of the US embargo (blockade) against Cuba since the Cold War era.

‘They need to know what the government does on their behalf in other countries, in this case in Cuba, and the much damage caused to Cubans,’ he stressed to La Opinion.

He recalled that Donald Trump imposed more restrictions during his term in office (2017-2021) and exemplified that, if a Cubans want to apply for a visa to travel here, they cannot get it at the US Embassy in Havana, so they must travel to third countries with the cost that implies.

He considered that the blockade policy is also a business that pays good dividends, and many people in the United States are taking advantage of it.

People are making money from the embargo, that is why there are Cuban-Americans in Florida who will never recognize the damage caused and will always blame the Cuban government, he emphasized.

Herrera affirmed that he voted for Joe Biden because he did not like Donald Trump and he perceives some uneasiness because the Democrat after becoming president stated that Cuba was not a priority.