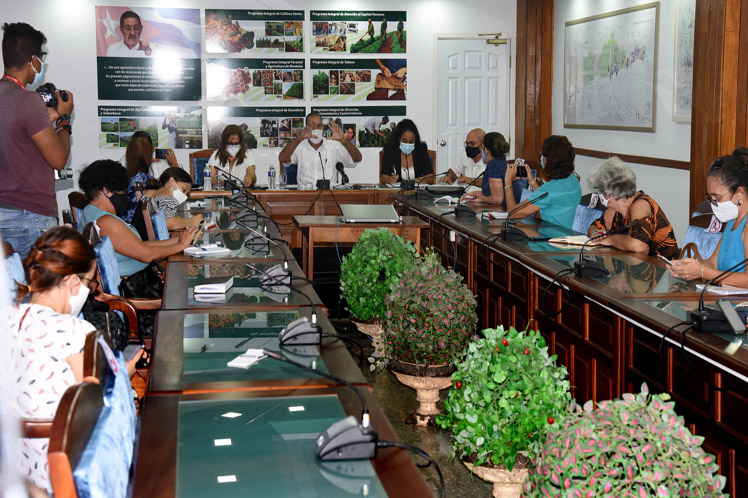 At a press briefing, Perez discussed the impact of a recent resolution issued by the Ministry of Finance and Prices, which allows creating better conditions for price negotiations and contracting with producers.

Such a document, as he explained, is based on recognizing the current costs as a consequence of the country’s economic limitations due to the tightening of the United States economic, commercial and financial blockade, in force for over six decades, the effects of Covid-19 and the world economic crisis.

It is a matter of making more flexible, innovating and eliminating obstacles in commercialization, processes in which all, both state and non-state (private) management, are called upon to participate on equal bases, the minister emphasized.

The aforementioned resolution leaves without effect the limit on the growth of prices of agricultural products, as well as centralized and wholesale prices for social consumption, medical diets and family care system.

That way, it is acknowledged that producers’ prices correspond to the current costs, without affecting the retail system of the aforementioned subsistence allowances and the provisions for the family care system and workers’ canteens.

In that regard, Minister of Finance and Prices Meisi Bolaños emphasized that although the price ceiling is eliminated, this does not undermine the powers of competent authorities to determine or establish retail prices, as well as the fight against speculation or unscrupulous persons.

She insisted that despite those difficulties, the country seeks to favor the population, especially with regard to foodstuffs.

In April, the Cuban government approved a package of 63 measures, 30 of which were deemed maximum and others of an immediate nature, with a view to stimulating food production in the nation.

Among those measures are the decision to lower electricity and water rates for farmers, to reduce the price of domestic animal feed and bioproducts, and to guarantee the commercialization of beef.

Senior authorities also agreed that small livestock producers could sell their meat directly in the retail network, in national currency or in foreign currency.