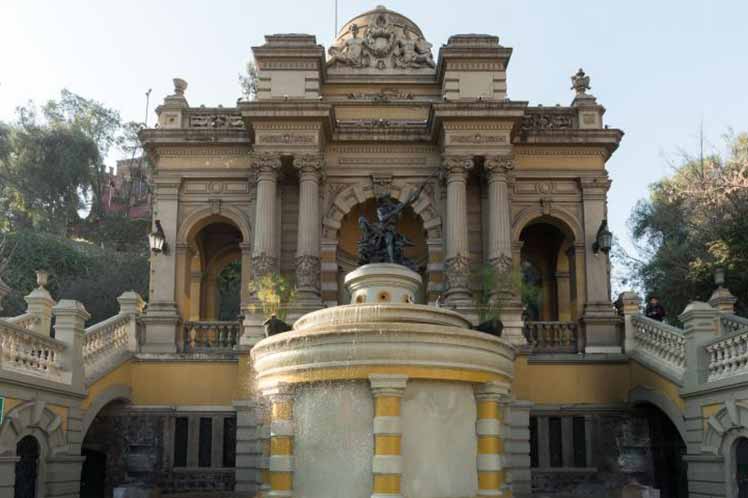 The Santa Lucía Hill (also known in Mapuche as Huelén Hill) is a meeting point for friends, lovers and entire families, as they come to bask in this green and peaceful island mainly in summer time.

Such a dazzling site rises like an oasis, barely 70 m of height, overheated by thousands of vehicles on the Bernardo O’Higgins Avenue and surrounding streets.

The Mapuches, the unconquerable indigenous people who occupied large part of what is Today Chile and Argentina, still call it Huelén, a word that in Mapudungún means melancholy, sadness or pain. Perhaps because its original image was that of a steep high point with blackish soil and nearly no vegetation.

Upon the arrival of the Spaniards, this sumptuous site was baptized as Santa Lucia by colonizer Pedro de Valdivia, who on February 12, 1541, founded at its feet the settlement that has became the city of Santiago de Chile over the years.

Scholars claim that the hill has kept its nature for a long time, although fortifications have by degree started off by being built that remain today to a great extent . Its location was due to its strategic position, which made it an observation point for the entire nearby territory.

At the end of the 19th century, Mayor Benjamín Vicuña Mackenna began the great transformation of this site as part of a series of works to celebrate the centenary of the Republic of Chile.

Thus, an entrance and ring road was built, as well as a gothic-style chapel at the top, gardens, small squares with fountains and, especially, a reforestation process was developed. All these actions radically switched Huelén Hill´s image.

In 1902, French architect Victor Villeneuve was responsible for a majestic main entrance and other neoclassical works including the Neptune Terrace, with triumphal arch, dome, fountains and walkways, providing the site with an European ambiance that, somewhat impostured, it is an indisputable part of the park’s attractions.

With a much more up-to-date touch, renowned Chilean painter and muralist Fernando Daza created in 1971 a ceramic-made mural in homage to incomparable Nobel Literature Prize winner, poet Gabriela Mistral, Nobel Prize which is undoubtedly one of the hill´s great attractions.

But Santa Lucia or Huelén Hill -or whatever else one prefers to call it- is above all an abrdigment, in its reduced extension and height, of the historical and cultural evolution of Chile´ capital, for which, too justifiably, it was declared as National Monument in 1983.