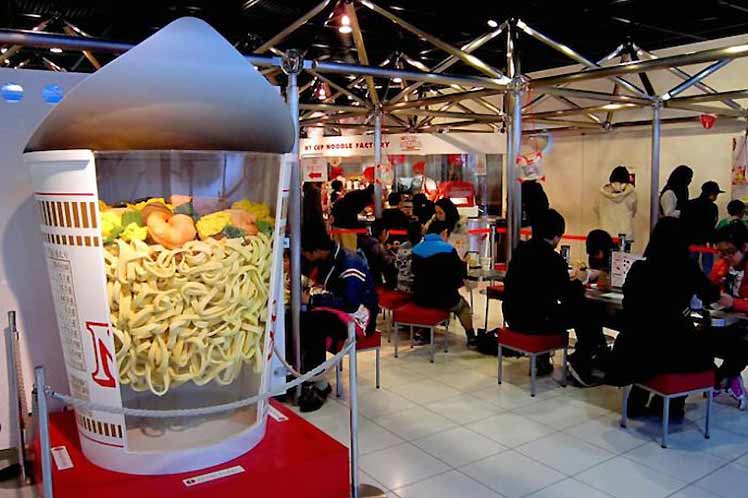 Havana, Aug 7 (Prensa Latina) The Ramen Museum in the Japanese city of Yokohama is the first theme park in the world dedicated to food, and where domestic and foreign travelers can appreciate a variety of recipes related to the famous noodle soup, originally from China.
Share on facebook
Share on twitter
Share on whatsapp
Share on telegram
Share on email

The existence of the park, created in 1994, reflects the passion of the Japanese people for a very affordable and popular dish also made with vegetables, soybeans and meats, with miso and shoyu being among its most famous variants.

One of the main attractions is the replica of a part of Tokyo in 1958, with small restaurants, movie posters of the time and shops specializing in the preparation of ramen according to the ingredients and practices originating in various Japanese regions.

Historians say that the year also marks the launching of instant noodles on the market when the Nissin company, now one of the most significant distributors of this product, marketed the chicken-flavored version.

In addition, the museum itself states on a plaque that the ambience and decorations convey a sense of nostalgia and identity and increases the appetite.

In the installation there are retro-style posters, galleries with images of the stage represented, as well as the ingredients and information to prepare some of the main recipes.

Among them, sapporo, a broth based on miso paste and chicken soup, or tonkotsu, a clear and dense stew that includes pork bones.

As a complement to the ornamentation associated with the Showa era (1926-1989), the museum treasures Scalextric miniature racing cars, present in the country since the 1960s and candy and toy stores, with more than 300 types of these items.