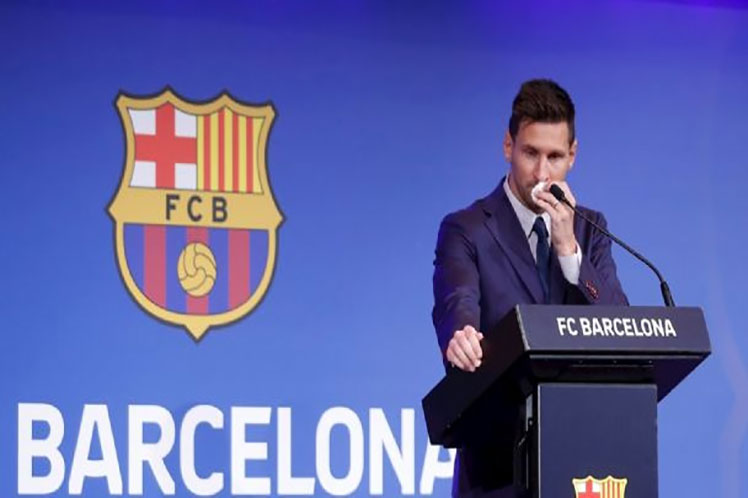 In the halls of the Camp Nou stadium, where he won so many glories for the Catalan club, with an audience in the outskirts spontaneously gathered, the Argentine soccer star said goodbye with some subliminal messages.

It was not clear which squad he will go to, although bells are ringing more and more towards the Seine and Paris Saint Germain seems to be rubbing its hands. Nor of his eventual return to Barcelona, ​​although he sealed it as a blood-pact-style promise.

I did everything in my power, at no time did I put obstacles in the way (…) I wanted to stay, my family did too, unlike last year (second semester) when I wanted to leave, the winner of six Ballon d’Or ruled.

A disconsolate cry marked the beginning of the press conference attended by his clubmates and others who once served at Barza. ‘I arrived at the age of 13 and left with a Catalan-Argentine wife and three children; I am proud of everything that I was able to contribute to Barcelona, ​​of the emotions I experienced and of the love for the shirt, with respect and humility ‘, Messi highlighted.

To insistent questions from the media, he made a couple of things clear: ‘For my part there was always the will to sign a contract, offering the reduction of my contract by 50 percent -and I did not ask for more -and I never made plans to go to another team this season.’

He avoided entering into conflict in his statement with the president of the Spanish League, Javier Tebas, nor with Barza’s boss, Joan Laporta, and assured that in any case he will have to turn the page.

‘At this time I still have nothing in hand (contract with another club), but this sadness now will pass once I return to the field. And yes, I want to win more trophies and surpass Dani (his friend, Brazilian Dani Alves) ‘, he commented.

Regarding the greatest memories of him with Barcelona, ​​Messi stressed that the moment of his debut and the early years are the most endearing, regardless of the successes achieved in the Champions League, Thee League and the Spanish and world club Cups .