New Italian medical donation to Cuba to face the Covid-19 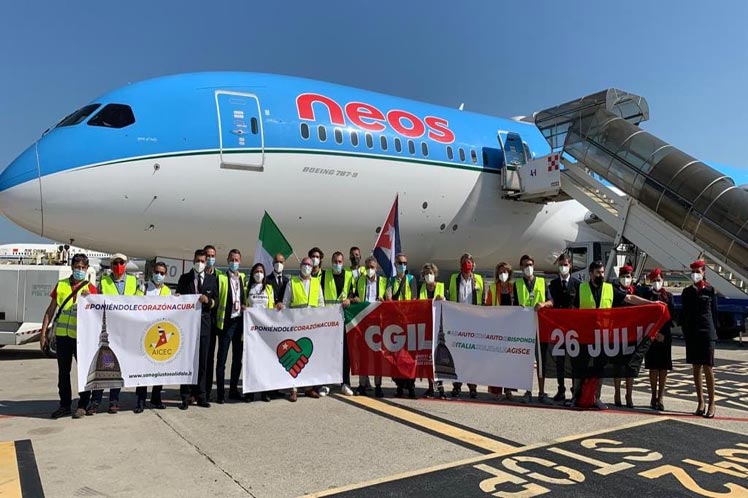 New Italian medical donation to Cuba to face the Covid-19

The Agency for Cultural and Economic Exchange with Cuba (Aicec) was the main promoter and coordinator of the initiative ‘Putting Heart to Cuba’, which was joined, with its own campaign, by the Italian General Confederation of Labor (CGIL), the largest and oldest trade union confederation in the country.

A communiqué from the Cuban Embassy in Italy also highlighted the participation of the National Coordination of Cuban Residents in Italy (Conaci), the National Association of Italy-Cuba Friendship (Anaic), the Regional Government of Piedmont, the Community of San Egidio and the Association La Villeta for Cuba.

In addition, the United Nations Articulated Platform for Comprehensive Territorial Development Program, the Italian Recreational and Cultural Association of Umbria, Our America-Italian Chapter of the Network in Defense of Humanity and the youth organization Cambiando de Ruta, among others.

The donation, made up of drugs, equipment and medical material and whose estimated value is around one and a half million euros, will be mainly destined to hospitals in Havana, Matanzas, Holguin, Cienfuegos, Santiago de Cuba, Guantanamo and Ciego de Avila.

Shortly before the departure of the Neos Airlines flight, representatives of the entities that contributed to the campaign made statements at Malpensa International Airport, in a brief ceremony led by Michele Curto, president of Aicec.

Speaking at the event, Ambassador Jose Carlos Rodriguez thanked the participants in the donation, which he described as ‘a great burden of love and solidarity to the Cuban people facing the Covid-19 pandemic, amidst the criminal U.S. blockade’.