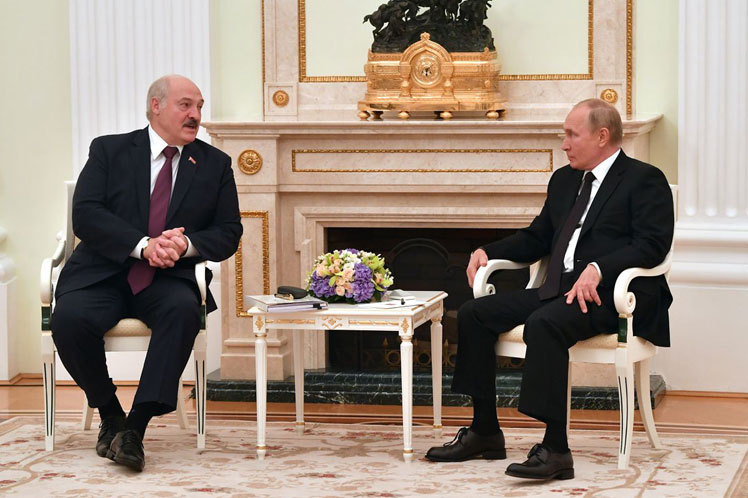 Moscow, Sep 9 (Prensa Latina) Russian President Vladimir Putin and his Belarusian counterpart, Alexander Lukashenko, agreed in Moscow on Thursday on the importance of launching a group of cooperation projects to consolidate bilateral integration.

‘We need to synchronize the clocks with you, put an end to some problems and give the governments the opportunity in the very near future – I think they will go to Minsk tomorrow – to secure some of those agreements,’ the Russian president noted at the beginning of the meeting.

Russia’s head of State clarified that unlike other occasions, this time the talks will not be related to any current political situation in the countries and will focus on ‘our current, long-term, joint work for many years.’

Putin warned that the joint plans concentrate on economic, trade, financial, customs, industrial and energy integration, key issues in view of the problems facing the world economy associated with the consequences of the Covid-19 pandemic, he said.

He pointed out that such circumstances encourage efforts to increase the competitiveness of both economies.

In that regard, Putin called to take advantage of the benefits offered by the State of the Union to overcome the crisis and move forward with confidence.

In that sense, the Belarusian head of State recalled that the programs had been the subject of lengthy negotiations for three years.

Lukashenko underscored how 30 roadmaps of what should be, at first, the main axes of bilateral cooperation had been drawn up until 28 concrete projects were defined and are now ready for discussion.

In his speech, the Belarusian leader expressed his agreement with Putin’s proposal to give the go-ahead to those programs, to allow both governments to review them tomorrow at the expert’s level and give them their approval.

‘That will be a breakthrough in many areas, it is not a secret,’ Lukashenko assured and expressing confidence that the negotiations will be ‘successful’ because Russians and Belarusians ‘are practically the same people,’ he commented.

More Russian rescuers will be sent to Türkiye

More Russian rescuers will be sent to Türkiye