Tributes and riots on the anniversary of the coup in Chile 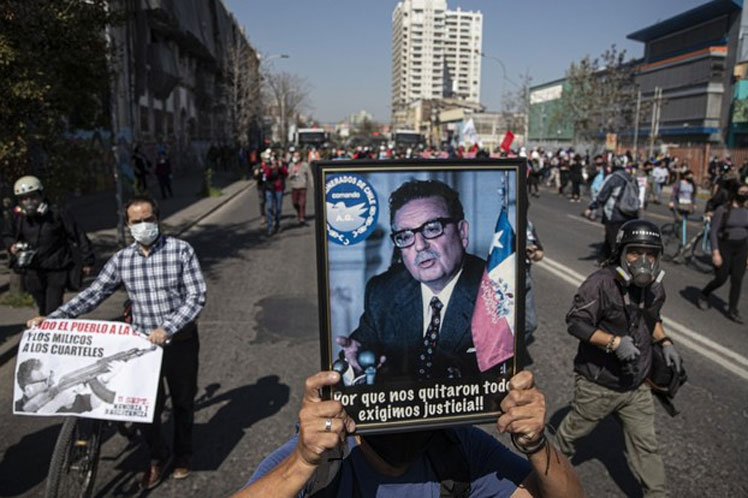 Tributes and riots on the anniversary of the coup in Chile

As is traditional, on this date, hundreds of people came early to pay tribute to the martyr president at the monument to his memory located next to the La Moneda Palace.

Little by little the base of the statue was covered with floral offerings deposited by opposition political parties, social organizations, unions and groups of relatives of victims of the dictatorship that was enthroned for 17 years after the sound that overthrew the legitimate Government of Popular Unity on September 11, 1973.

Numerous speakers recalled the achievements of the Allende government in just three years, the strong repression that followed the coup, and the legacy of the socialist leader, who regained special strength with the social outbreak of October 2019.

They also pointed out this anniversary takes place a few months before a presidential election that could bring progressive forces back to La Moneda, and in the middle of a process to draft a new Constitution that includes a good part of Allende’s program.

Also like every September 11, thousands of people gathered in the Plaza de Los Héroes to march on pilgrimage to the General Cemetery, in the Recoleta commune, where the remains of Allende and many other victims of the dictatorship rest.

The march advanced through the emblematic Alameda, and when passing in front of the south facade of La Moneda, clashes began with the police forces that used water and gas launchers against protesters, who riposted with stones, fireworks and other objects.

The clashes were repeated in other points such as at the University of Chile and in San Antonio with Alameda, but the march continued its course to the General Cemetery, at whose entrance there were also clashes and groups of protesters erected barricades.

The demonstration was called by left-wing parties, youth organizations, unions, social movements and groups of relatives of the victims of the dictatorship.

A repeated claim on this occasion was freedom for the prisoners of the popular revolt, a general pardon for those people, and as always, the claim for truth, justice and reparation for more than a thousand disappeared detainees of the dictatorship whose whereabouts are still unknown. .