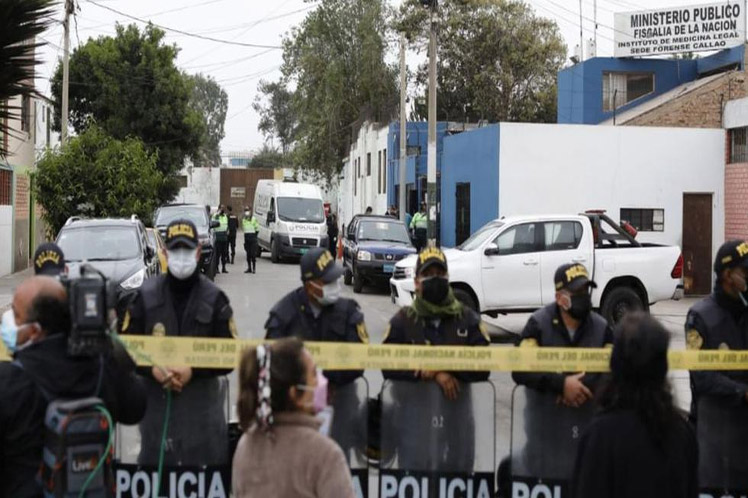 At the same time, there is growing expectation about what the Public Prosecutor’s Office will decide on the fate of Guzman’s remains, to whom, in compliance with the legal procedure, the Government left the responsibility, without intervening directly.

The extreme right-wing legislators Martha Moyano and Jose Cueto went to the Callao morgue in order to verify the death of the former rebel leader, who died this early morning in the prison built after his capture in the naval base of the same district, after several weeks of suffering from various ailments.

Cueto could not pass the police barrier blocking the street of the forensic medicine center by order of the prosecutor in charge of the case, Vladimir Farfan, and expressed his annoyance for the impediment, alleging that legislators like him can make surprise visits to any State premises.

Moyano arrived at the morgue’s door, but he could not enter either because, according to what he affirmed, the staff indicated that the prosecutor prohibited the entrance because the forensic work is not finished yet although yesterday the autopsy report was published, which points out as cause of death a bilateral pneumonia.

The parliamentarian raises suspicions about the veracity of the death and the attitude of the Government regarding the fact, which was strongly rejected on Sunday evening by the Ministers of Justice, Anibal Torres; and Defense, Walter Ayala.

Meanwhile, Cueto assured that, instead of waiting for what the Public Prosecutor’s Office decides on the corpse, President Pedro Castillo must assume the responsibility and order to cremate Guzman’s remains and throw them into the sea, so that there will not be a tomb to gather his followers.

Guzman’s cremation would set aside the right of his widow, Elena Iparraguirre, to dispose of the corpse. Minister Torres, who was joined by his Defense colleague, raised the idea as a suggestion to the Public Ministry, and both said that there is not the slightest doubt about Guzman’s death.