Intense week for Cuban diplomacy in defense of multilateralism at UN 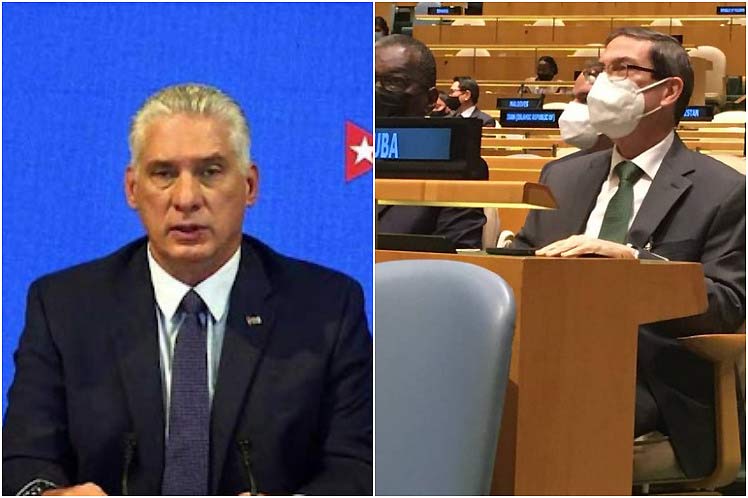 Intense week for Cuban diplomacy in defense of multilateralism at UN

Since last Monday, when the high-level segment of the 76th session of the UN General Assembly began, the Cuban head of State has defended a more equitable and democratic international order in which no one is left behind.

During the Moment on Sustainable Development Goals, the president recalled that Cuba accepted and assumed the 17 goals being aware ‘of the great challenges brought on us by the condition of a developing island State and the impact of the tight economic, commercial and financial blockade imposed by US.’

Through a video conference, Diaz-Canel charged that Washington’s blockade, intensified during the Covid-19 pandemic, is the main obstacle that hinders the country’s efforts to advance in its economic-social development and in the implementation of the 2030 Agenda.

At a meeting of the Alliance of Small Island States, President Diaz-Canel ratified Cuba’s commitment to climate change.

‘Developed countries must assume their responsibility in support of efforts to achieve sustainable development for all peoples and to save the planet from the threats they have caused,’ he stated.

Diaz-Canel also underlined Cuba’s humanistic will in the face of these risks and denounced the role of developed nations in destroying the environment due to irrational consumption patterns.

At the UN general debate on Thursday, the Cuban president called for renewed and strengthened multilateralism, solidarity and the search for global solutions to common problems.

In this sense, he urged to reverse inequality in the global vaccination process against Covid-19.

Hundreds of millions of people in low-income nations are still waiting for their first dose and cannot even guess if they will ever get it, Diaz-Canel pointed out.

In his speech, he described as inconceivable that such inequality occurs when military spending in 2020, amid the pandemic, totaled nearly two billion dollars.

In another part of his speech, the president stressed Cuba’s determination to support just causes and confront abuses, foreign aggression, colonialism and racism.

For his part, Cuban Foreign Minister Bruno Rodriguez, who attended the sessions of the General Assembly on site, held separate meetings with counterparts from several countries, including Russia, Qatar, Algeria, Iran, Nicaragua, Venezuela and Guatemala.

He also met with senior representatives of multilateral organizations, including UN Secretary General Antonio Guterres and the president of the 76th session, Abdulla Shahid.

In all cases, he underlined Cuba’s commitment to multilateralism, cooperation in different fields, and strict respect for the principles of the United Nations Charter.