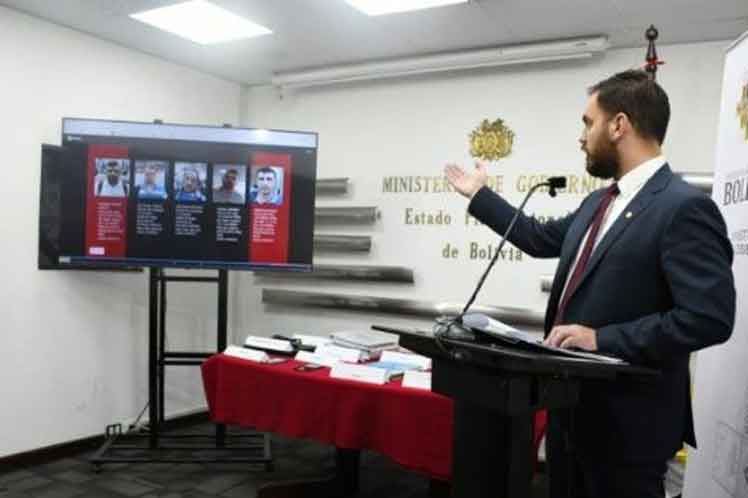 La Paz, Oct 18 (Prensa Latina) Bolivian Interior Minister Eduardo del Castillo informed on Monday that they have identified the paramilitaries who participated in the assassination attempt in 2020.

According to an investigation carried out by The Intercept, an American magazine, the country was on the verge of a new coup and an armed invasion organized by US mercenaries after the electoral victory of President Luis Arce in October last year.

The national government had access to intercepted audios, model contracts and e-mails that attribute the destabilization plan to Fernando Lopez, former Minister of Defense during the de facto government of Jeanine Añez, as published by the Bolivian Information Agency (Agencia Boliviana de Informacion).

‘We think that the way to solve our conflicts is not violence and even less bringing hitmen to the interior of the Plurinational State and, particularly, we understand that, according to information we are providing, that Mr. Lopez Julio’s objective was to stay in power by killing Bolivians and hiring foreign hitmen,’ he assured.

Del Castillo mentioned others involved such as Enrico Galindo Arias, Ronal Ramirez Salamanca, Sam Brown, Ernest H. DeLong, Davion Covell Hart, Joe Pereira and Arcangel Pretel Ortiz. The latter was the liaison of the so-called security company Counter Terrorist Unit Federal Academy, based in Miami and run by Venezuelan opposition leader Antonio Emanuel Intriago Valera. The Minister underlined that these people would have an initial annual contract of 125,000 US dollars or 10,416 dollars per month.

‘There was a whole armed strategy to prevent the rise of President Luis Arce and to hijack our democracy. The contracts, the amounts, the resumes of the people involved, even the weapons they planned to use to kill Bolivians were unveiled,’ he said.