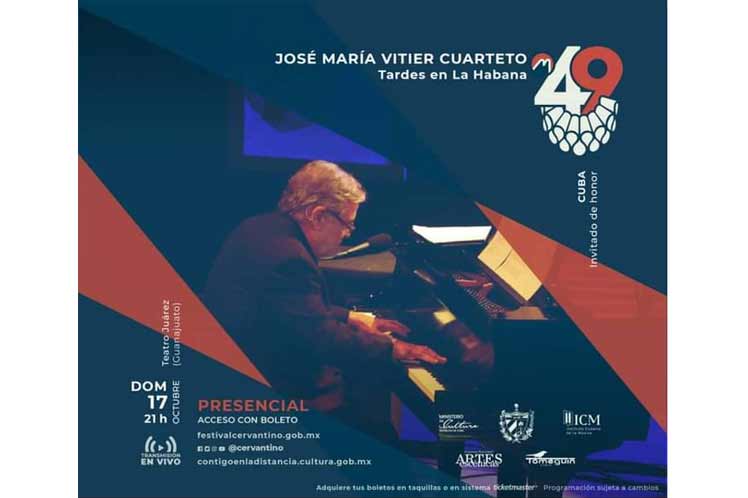 Hosted at Teatro Juarez, the Cuban maestro’s performance entitled ‘Tarde en La Habana’ (Afternoon in Havana), along with soprano Barbara Llanes, percussionist Yaroldi Abreu and Abel Acosta, attracted the audience at the Mexican theater, which will be celebrating its 118th anniversary.

On another stage, La Reina and La Real, two female representatives of hip hop and the young artistic vanguard in Cuba, raised their voices in favor of women’s empowerment.

Earlier, troubadours Ray Fernandez and Eduardo Sosa offered a sample of the good national trova that virtually distinguished the Cuban spirit, humor and reflection from Casa Cuba, which exhibits the island’s culture in the heart of Guanajuato.

During the visit to Mexico, the delegation headed by Cuban Culture Minister Alpidio Alonso talked about the Timbalaye Festival with organizer Maria Elena Mora, who confirmed future alliances between the Caribbean event, the Veracruz Carnival and the Rumba Route 2022. For his part, Pedro Hipolito, mayor of Xalapa municipality, ratified the condemnation to the economic, commercial and financial blockade policy of the United States against the Caribbean nation and declared Alonso a Distinguished Visitor.

Until October 31, the multicultural event places Cuba at the epicenter of its broad program, with more than 80 activities, not only in-person but also virtually, dedicated to dance, music, opera, theater, visual arts, literature and audio-visual aids.