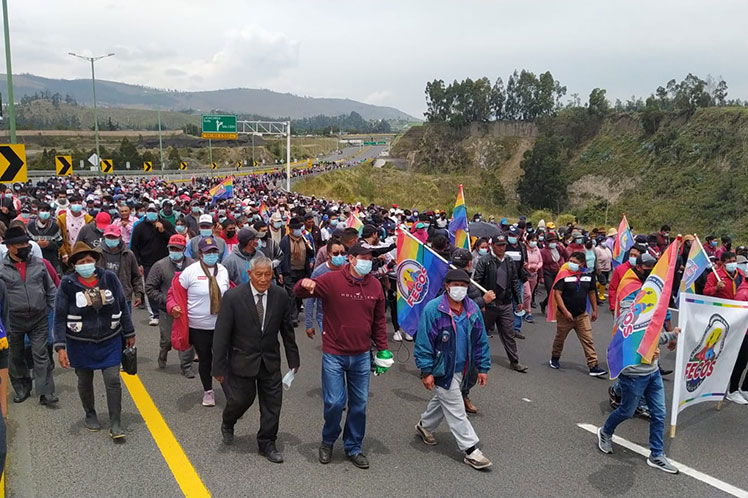 The mobilizations were called by the United Workers Front (FUT), the Popular Front (FP) and the Confederation of Indigenous Nationalities (CONAIE).

The call was joined by groups such as the Federation of University Students of Ecuador and the National Confederation of Peasant, Black and Indigenous Organizations, among others.

The idea is to carry out different actions all day long in several national provinces, demanding fair policies for the working masses and lower income sectors.

Among the demands is to freeze the price of fuels (gasoline and diesel) at a lower value than the current one, increased by the President prior to announcing the resolution.

Likewise, demonstrators support the draft Labor Code recently presented to the Legislative by the FUT, and reject the proposed Law for the Creation of Opportunities.

‘First, the mobilization is territorial, in the territory of each people and each nationality, coast, highlands and Amazon,’ Leonidas Iza explained, president of CONAIE.

Iza also insisted that it is unsustainable to accept the current costs of oil derivatives, set at 2.55 dollars a gallon for extra gasoline and 1.90 for diesel.

Rallies will also be joined by the collective Women for Change, which convened on social networks to rural and urban workers, housewives, small businesswomen and high school and university students to the great day in defense of their rights.

Rice producers also advanced that they will be part of the resistance actions with a march to show their dissatisfaction with the current situation; moreover, several public transport operators decided to go out to work today from 09:00 local time in order to sensitize the Executive with the need for a meeting to reach agreements.

Meanwhile, the President of the Republic announced there will be a device to avoid the closing of roads, since this, along with the obstruction of traffic, is forbidden by law.

‘Of course, with public force and the national police, we will impose order’, he concluded.

Ecuador’s Parliament calls to talks in view of national strike

Ecuador’s Parliament calls to talks in view of national strike