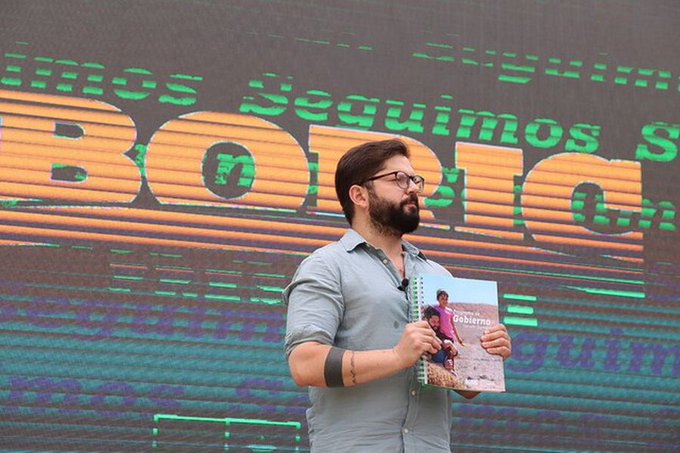 His proposal for a new Chile was developed based on a process in which 33,000 people participated throughout the country.

“Unlike what other candidates have done, we decided to open it to the public”, Boric said in the presentation.

Among prioritized tasks is to end Insurance companies of the Pension Fund (AFP) and build a public, non-profit system that guarantees decent pensions for all, as protesters claimed during the social outbreak of 2019.

It also plans to promote a universal health system that does not discriminate against families because of their income and guarantee free education for all citizens.

“This is a program shaped within the Chilean people, in social struggles, in the construction of an alternative society, more just, more equitable and more supportive”, as expressed by the presidential candidate for ‘I approve Dignity’ coalition, which includes the Broad Front and the Communist Party, among other organizations.

In tax matters, its program is aimed at achieving a greater contribution from those who have more and fighting tax evasion.

According to a survey by ‘Plaza Pública Cadem’ company, published today, Boric appears second in voting intentions, after candidate of extreme right, José Antonio Kast, in a list of seven candidates.

“This election has not been won, it is not assured who will be in the second round. He who becomes too confident, he who sins of arrogance, he who thinks he knows it all, will lose”, Boric said.

His other proposals include increasing the minimum wage, reducing work to 40 hours a week, recovering 500,000 female jobs and strengthening the Ministry of Women.

His program also aims at promoting the decentralization of the country, guaranteeing the human right to water, caring for the environment and the search for dialogue with all indigenous peoples.

If reaching the presidency, the leftist candidate would re-found the police, would make up a permanent human rights qualifying commission and go forward in achieving a safe, orderly and regular immigration policy.